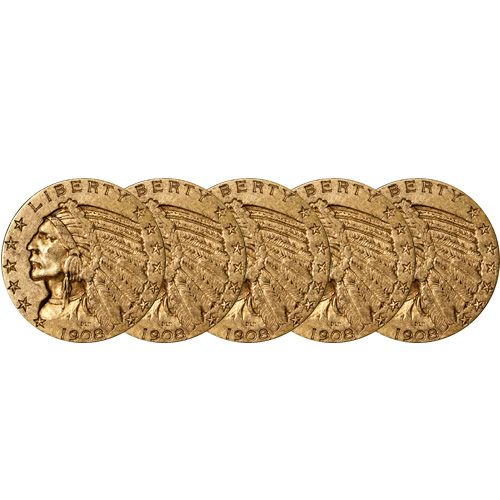 In 1908, the United States Mint introduced the fifth-and-final design to feature on the Gold Half Eagle denomination. In production since 1795, the Gold Indian Head design was struck on the coins starting in 1908 and this date remains one of the rarest in the Indian Head Series with its production only lasting half of the calendar year in 1908. Today, 1908 Pre-33 Gold $5 Indian Half Eagle Five-Coin Sets are available to you online at Silver.com.

The first decade of the 20th century saw the United States Mint begin to redesign its circulation coins. Between 1907 and 1921, all circulating currency in the US was redesigned to include the four Gold US Eagle denominations, the penny, the nickel, the dime, the quarter, the half dollar, and the silver dollar, in order.

All of the 1908 Pre-33 Gold $5 Indian Half Eagle Five Coin Sets available here come with a total of five coins from the 1908 debut of the Gold $5 Indian Half Eagle. With .242 Troy ounce of 90% gold per coin, you will receive nearly 1.25 Troy ounces of actual gold content with your purchase of this set. All five coins are dated 1908 and feature America’s first-ever incuse design strike. An incuse coin has designs that are struck into the surface of a specimen rather than engraved in 3D relief on the field of the coins. Each coin is a Very Fine+ specimen with medium-to-light signs of circulation on the coins.

On the obverse of 1908 Pre-33 Gold Indian Half Eagles in this five-coin set is an effigy of the indigenous tribal figure. This design from Bela Lyon Pratt features a left-facing indigenous figure with a ceremonial headdress on his head. The coins have new inscription and design layouts from the Liberty Head issue with the 13 stars split six on the left and seven on the right, and the word “Liberty” is added.

The reverse side of the 1908 Pre-33 Gold $5 Indian Half Eagle Coins in this five-coin set features a new bald eagle design. In this image, Pratt features an American bald eagle in left-profile relief with its wings resting at its side as it sits perched on a sheaf of arrows with an olive branch wrapped around the arrows.

Please contact Silver.com if you have any questions about gold for sale. You can call our team at 888-989-7223, chat with us live online, or email us directly.