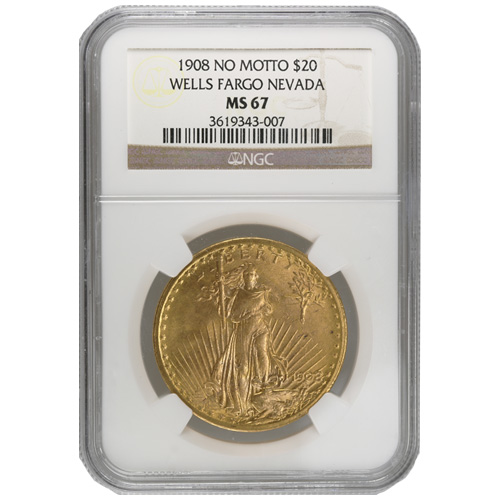 The Gold Double Eagle Coin from the United States Mint was a $20 (USD) circulation gold coin popularly available from 1849 to 1933 when the US ended its use of the gold standard to back currency. The most famous design to appear on any Gold Eagle coin, regardless of denomination, was Augustus Saint-Gaudens’ 1907 design of Lady Liberty. The 1908 $20 Gold Saint-Gaudens Double Eagle Coin is currently available to you for purchase online at Silver.com with NGC certification.

Gold Saint-Gaudens Double Eagle Coins feature a design created in 1907 by Augustus Saint-Gaudens. Saint-Gaudens was commissioned by President Theodore Roosevelt to help revamp the appearance of American circulation coin designs to meet the president’s vision for the nation as it emerged as a new international power in the early 20th century.

Saint-Gaudens created a unique vision of Liberty that depicted her figure in front-facing relief as she walks forward from Washington DC. She holds a large olive branch in her left hand and hoists her torch high overhead in her right hand. The original design included 46 stars around her figure to reflect the number of states in the Union, along with no national motto. The Saint-Gaudens’ $20 Double Eagle did not feature the motto “In God We Trust” until late in 1908 and didn’t feature 48 stars around Liberty until 1912 when New Mexico and Arizona joined the Union.

On the obverse of 1908 $20 Gold Saint-Gaudens Double Eagle Coins is the image of Liberty as described above. This design featured on the coins until 1933 when circulation gold coin production in the United States ceased to bolster gold reserves.

The reverse face of 1908 Gold Saint-Gaudens Double Eagles includes the design of a bald eagle flying over the sun as its rays stretch upward toward the sky. The coin issued in this series later in 1908 would feature the national motto on this side, but these $20 Gold Double Eagles have NO MOTTO on this face.

All 1908 $20 Gold Saint-Gaudens Double Eagles Coins in this listing are available to you with a Mint State 67 certification. Coins in this condition have original luster from the mint and feature a maximum of four minuscule contact marks, with one or two of those marks visible in the primary focal points. Although hairlines may exist, you cannot see them without magnification.

We encourage Silver.com customers to reach out to us with questions at 888-989-7223. You can also connect with us live online through our chat service or send us an email.