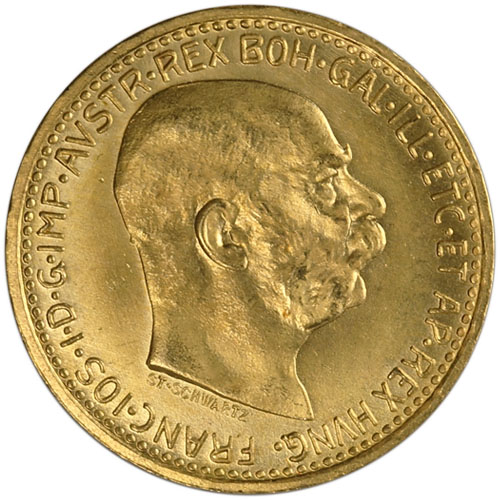 The Corona Gold Austrian Coins were issued in 1892 for the first time at the height of the power of the Austro-Hungarian Empire. One of the largest in Europe during the 19th century, the Austro-Hungarian was controlled by Emperor Franz Joseph I for just over 68 years, making him the longest-ruling leader in the empire’s history. Today, 1912 10 Corona Gold Austrian Coin Restrikes are available to you at Silver.com.

The Austrian Empire initially offer the Corona Gold Coins in 1892 with three major denominations: 10, 20, and 100 Corona. The coins were available for a limited period of time through 1911 and 1912, depending upon the denomination in question. Limited demand for gold coins and the economic factors preceding World War I led to the end of the Corona Gold Austrian Coins.

All 1912 10 Corona Gold Austrian Coins in this listing are restrikes created after 1912. The coins feature a 1912 date mark to honor the 68th birthday year for then-reigning Emperor of Austria, Franz Joseph I. The coins are available to you in this listing with protective plastic.

Emperor Franz Joseph I took over the young Austrian Empire in 1848 when he was just 18 years old. He would go on to rule over the Austrian Empire’s original lands as the Emperor of Austria until his death in 1916 during World War I. He was 86 years old at the time of his death. During this time, he oversaw the formation of the Austro-Hungarian Empire. As a result, he also took the role and title of King of Hungary, holding onto that title for longer than any previous Hungarian king.

On the obverse of 1912 10 Corona Gold Austrian Coin Restrikes, you’ll find the right-profile portrait of Franz Joseph I. The emperor is featured with a bald head and his iconic bushy facial hair. The engravings on this side of the coin identify him as Emperor of Austria and King of Hungary, and are featured in Latin.

The reverse of 10 Corona Gold Austrian Restrike Coins includes the crowned arms of Austria. Based upon the crest of the Hapsburgs, the ruling dynasty that formed the Austrian Empire in 1804, the seal includes a double-headed eagle with a crown over the head.

Please feel free to reach out to Silver.com with your questions about gold for sale. You can call our customer service team at 888-989-7223, chat with us live online, or simply send us an email with your inquiries.