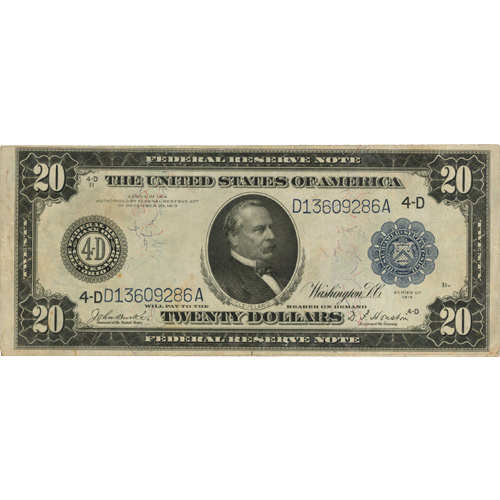 The United States Treasury rolled out modern Federal Reserve Notes in two major series in 1914 and 1918. While the 1918 Series featured denominations no longer in use today, the 1914 Series featured denominations that are still in production today and widely used by Americans in everyday commercial transactions. However, these original notes have greater collectible value in many cases than the assigned face value of the day. Now, Very Fine 1914 $20 Federal Reserve Notes are available to you for purchase online at Silver.com.

On the reverse of 1914 $20 Federal Reserve Notes is a depiction of a steam locomotive on the left, an airplane flying above it, and a coal-powered cruising vessel on the right. This design was commonly known as “Land, Air, and Sea.”

These 1914 $20 Federal Reserve Notes are available with plastic currency sleeves and come in Very Fine condition. This can refer to notes with moderate signs of circulation, mild soiling, and numerous folds up to those notes with only light signs of circulation, light soiling, and seven to 10 folds only. All of the notes are free of major detracting flaws. Please note that buying several can result in slight variations between the Very Fine condition of each note. Overall, the notes all fall within the acceptable grading range for Very Fine.