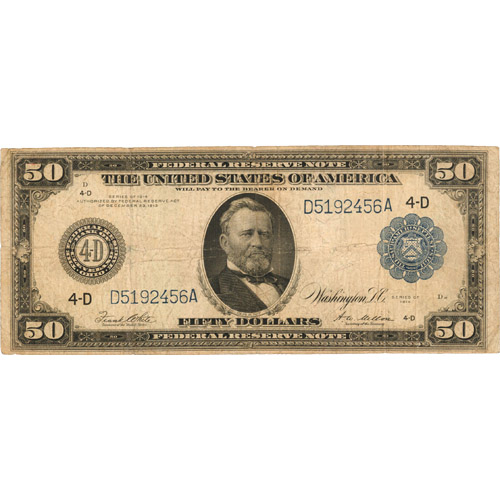 In 1929, the Federal Reserve Note was introduced with a new small-sized format that is effectively the same size as the modern bills in the pockets of Americans. While the obverse of the 1914 and 1918 Series Federal Reserve Notes had portraits of presidents and other important Americans similar to those still in use today, the reverse of the large-sized notes had artistic vignettes not seen on American notes anymore.

In the artistic vignette on the reverse of 1914 $50 Federal Reserve Notes, you will find the female allegory representing Panama standing astride the isthmus of Panama. The recently completed Panama Canal made transit between America’s East and West Coasts via the sea much faster. In this design, a battleship approaches from the east and a commercial ship from the west.

These 1914 $50 Federal Reserve Notes are available in Fine+ condition and come with plastic currency sleeves. Each one has considerable signs of wear and tear that include the possibility of rounded corners, margin splits, and numerous folds. Please bear in mind that 1914 Series notes were initially printed with red ink on the serial numbers and US Treasury seal, but later transitioned to blue ink. To this day, surviving specimens more commonly have blue ink. Federal Reserve Bank branch seals can vary too. As an example, you may find a 4-D seal representing the Federal Reserve Bank of Cleveland.

Silver.com customer service is available to you at 888-989-7223. Alternatively, you can contact us online using our live chat or email address features.