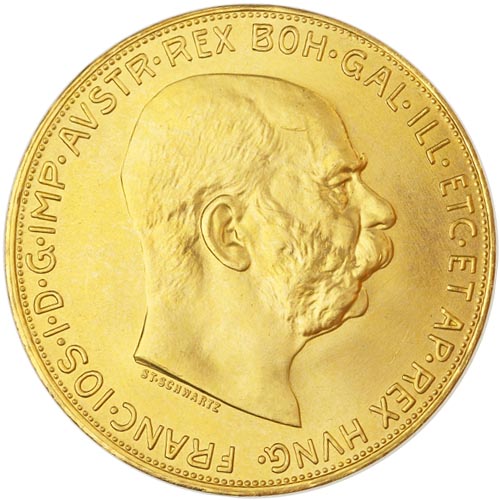 Any quantity available for $39.99 per coin over spot!

The Corona was the official denomination for currency in the Austro-Hungarian Empire during the late 19th and early 20th centuries. The Gold Corona was a denomination of coins issued by the empire starting in 1892 when the empire adopted the gold standard in that year. Today, 1915 Gold 100 Corona Austrian Coins are available to you online at Silver.com.

The Austro-Hungarian Empire was one of Europe’s largest and most powerful in the 19th and early 20th centuries. The empire was the third largest in Europe in terms of area and population, and it was known as one of the driving forces of Europe’s industrial revolution during the 19th century.

All of these 1915 Gold 100 Corona Austrian Coins are available to you inside of protective plastic. The coins have an Almost-Uncirculated plus condition. Coins with an AU condition have only slight signs of wear and tear on the highest points of the design elements.

On the obverse of 1915 Gold 100 Corona Austrian Coins is the left-profile portrait of Emperor Franz Joseph I. Franz Joseph is Europe’s third-longest reigning monarch. He was crowned the Emperor of Austria and King of Hungary in December 1848 and served until his death in November 1916.

The reverse face of 1915 Gold 100 Corona Austrian Restrike Coins features the double-headed crowned eagle. This design is the official coat of arms for the Austro-Hungarian Empire and includes the shield of the Hapsburg Dynasty that reigned over the empire throughout its existence.

Please don’t hesitate to reach out to Silver.com with your questions about buying gold. You can call our customer service team at 888-989-7223, chat with us live online, or simply send us an email with your inquiries.