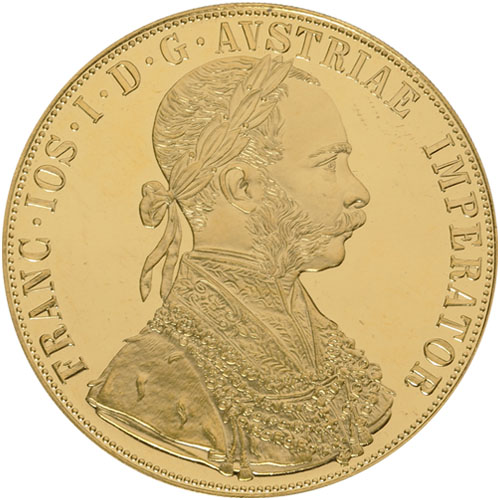 The ducat was once one of the most widely used global currencies, like the British Pound Sterling or the United States dollar of today. Ducat coins were produced by various European nations for use as a trade currency, but one of the most famous gold coins from this era is still available today as a restrike from the Austrian Mint. Right now, 1915 4 Ducat Gold Austrian/Dutch Coins are available to purchase online at Silver.com.

Each 1915 4 Ducat Gold Austrian/Dutch Coin in this listing comes to you with an About Uncirculated-plus condition. Coins in this condition showcase only slight signs of wear and tear on the highest points of the design elements.

Although many nations throughout Europe issued the ducat as a form of trade currency, Austria was one of the most prominent. It wasn’t among the first to issue ducats, with the first Austrian gold ducats emerging in 1511, however, it was among the last to do so. After many nations had given up on producing ducats, the Austro-Hungarian Empire continued to produce gold ducats alongside its Gold Corona coins into the 20th century. The last major year of production for Gold Austrian Ducats was 1914.

On the obverse side of these 1915 4 Ducat Gold Austrian/Dutch Coins is the image of Franz Joseph I. The third-longest-reigning European monarch of all time, Franz Joseph I was the Emperor of Austria from 1848 until his death in 1916. He concurrently served as the King of Hungary from 1867 until his death following the formation of the Austro-Hungarian Empire in that year. Inscriptions on the coin’s outer design field are in Latin and identify Franz Joseph I as Emperor of the Austro-Hungarian Empire.