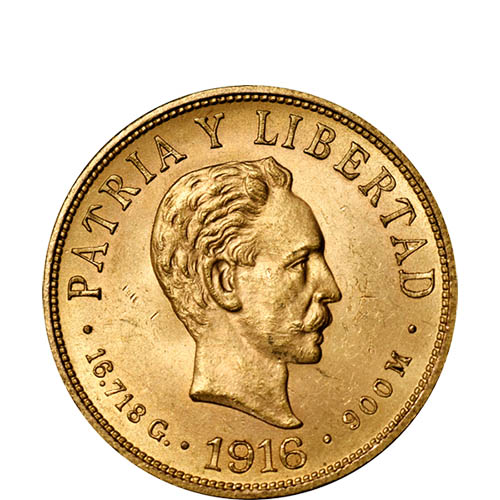 Some of the most beautiful historic gold coins from the Western hemisphere come from the Caribbean island of Cuba. Following its independence from Spain and its status as a protectorate of the United States of America, Cuba used Gold Pesos in circulation that were produced in the US by the United States Mint. Today, 1916 Gold 10 Peso Cuba Coins are available to you online at Silver.com.

All of these 1916 Gold 10 Peso Cuba Coins are available to you for purchase here in protective flips. The coins are more than 100 years old, yet remain in Brilliant Uncirculated condition. While the coins maintain a brilliant, clear design strike and some mint luster, you may notice minor contact marks or other flaws throughout the field. The coins are overall visually impressive.

The 1916 Gold Cuba Coin available here was not only struck in the United States, but was also designed by US Mint Chief Engraver Charles E. Barber. Chief Engraver Barber held the post from 1879 to his death in 1917 and designed such iconic coins as the Barber Coinage in the dime, quarter, and half-dollar denominations, as well as the Liberty Nickel.

On the obverse of 1916 Gold 10 Peso Cuba Coins is a depiction of Jose Marti. This right-profile bust captures an image of the poet and philosopher who was a vocal supporter of the nationalist cause in Cuba during the late-19th century.

The reverse side of 1916 Gold Cuba Coins comes with an image of the Cuban coat of arms. In this design, a spade shield offers three design fields with different imagery symbolic of the island nation. The upper field, for example, shows the sun setting over the water on the horizon with two points of land coming together at a harbor entrance with a key in the design field.

Please contact Silver.com if you have any questions when buying gold. You can call us at 888-989-7223, chat with us live online, or email us directly.