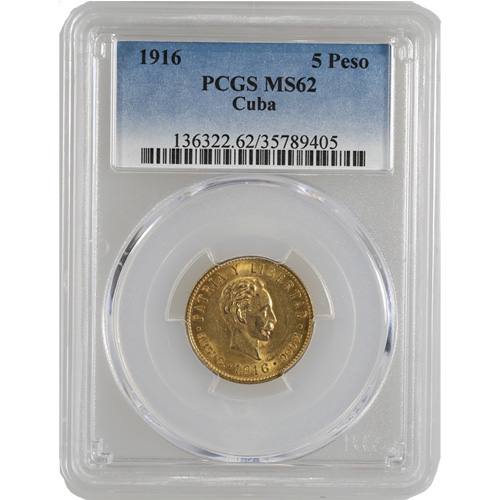 One of the most unique pieces of gold for sale from the early 20th century comes from the island nation of Cuba. Dating to an era of democratic independence, the Republic of Cuba was founded in 1902 following independence from Spain and a brief US Military occupation. The fledgling nation was economically prosperous at the time, but was reliant on the United States Mint for the design and production of its gold coinage. Now, certified 1916 Gold 5 Peso Cuba Coins are available to you for purchase online from Silver.com.

The Spanish-American War in 1898 reset the balance of power in the Western Hemisphere. Spain was one of the last European colonial powers with colonies and territories throughout the Caribbean, Latin America, and the Pacific. Cuba was the primary flashpoint of the war, and with the US victory in the conflict, the landscape changed dramatically.

In the Pacific, America gained territories such as Guam and the islands of the Philippines. Closer to home, the US avenged the sinking of the USS Maine in the harbor at Havana and assumed military control over the island for several years. In 1902, Cuba gained formal independence as the Republic of Cuba, but remained closely aligned with the United States.

The obverse of 1916 Gold Cuba Coins features an image of Jose Marti. A philosopher, poet, professor, and advocate of Cuban independence from Spain, Marti was chosen to grace Gold Peso denominations for Cuba by US Mint Chief Engraver Charles E. Barber, the designer of these coins.

On the reverse of 1916 5 Peso Cuba Coins is a depiction of the national seal. The coat of arms for Cuba features a shaped-shaped shield with a top design field showcasing a harbor guarded by hills and a key in front of the sun. The bottom half of the shield is split in two vertically.

These 1916 Gold 5 Peso Cuba Coins are available to you with a Mint State 62 certification. Housed in plastic slabs from the PCGS, these coins have impaired or dull mint luster and the possibility for flaws such as clusters of small contact marks, detracting flaws within the primary focal field, and scattered hairlines. Overall, the eye appeal of these century-old coins is acceptable.

Silver.com customer service is available at 888-989-7223. Alternatively, you can chat with us online or simply send us an email.