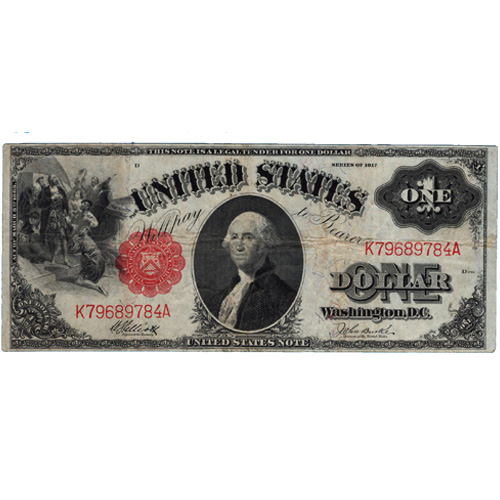 The United States Note was the first major, long-running form of paper currency issued in the United States. It followed the short-lived Demand Note issued a year earlier to help fund the Union Army at the outset of the Civil War. The $1 denomination in the US Note, or Legal Tender Note, was introduced in 1862 with the design of Salmon P. Chase on the obverse. In 1869, it was redesigned to include the effigy of President George Washington found on these 1917 examples. The reverse design found on these 1917 Legal Tender Notes was the third overall design for the $1 denomination and the second in conjunction with President Washington’s effigy on the obverse.

All of these 1917 $1 Legal Tender Notes are available to you in Very Fine condition. When paper notes are labeled as Very Fine, it indicates that the notes have light or moderate signs of circulation. The most common signs of circulation for a note in this condition are soiling and folds or creases. Overall, the notes are free of any major detracting flaws and have only minor visible defects present.

President George Washington features in the center of the note design on the obverse of the 1917 $1 Legal Tender Note. To the left-hand field of the note’s surface, you will find a portrait depicting the arrival of Christopher Columbus in the New World. The original 1869 redesign with Washington’s effigy had a circular, red US Treasury seal around the denomination to the right of his portrait and a serial number to the left. These 1917 Series notes have the fourth revision of the design, with the serial number on the left and right, the denomination on the right, and the US Treasury Seal to the left of Washington’s portrait.

In the reverse design of the 1917 $1 Legal Tender Note, you will find an X-design across the center of the note with “United States of America” printed. This design feature is the third of the overall series and the second redesign with the portrait of Washington on the obverse.

Please contact Silver.com with any questions. You can contact our team on the phone at 888-989-7223, chat with us live online, or simply send us an email with your inquiries.