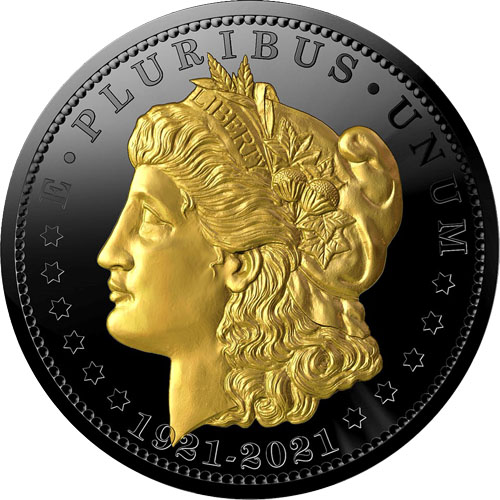 From the United States Mint to private mints located in North America and around the world, 2021 has seen a variety of commemorative pieces marking the 100th anniversary of the final strike of the Morgan Dollar design. Introduced in 1878, the Morgan Dollar was regularly issued through 1904, with one final release in 1921 as the United States resumed silver coining after a long hiatus. Today, 1921-2021 Morgan Dollar Black Ruthenium Tribute Rounds with gold-plated visuals are available to you online at Silver.com.

The Morgan Dollar was issued by the United States over the course of 27 consecutive years, with a 28th date mark available in 1921. The United States issued silver dollars in the late 19th and early 20th centuries through Congressional legislation that authorized the purchase of silver on the open market. That legislation had a cap on the amount of silver the US was to purchase. Once exhausted, silver dollar coining was canceled. This occurred in 1904, with no new silver dollars struck through World War I and the immediate post-war era. New legislation in 1918 authorized a resumption of silver dollar coining, with the program restarting in 1921 with the historic Morgan Dollar design.

All of these 1921-2021 Morgan Dollar Black Ruthenium Tribute Rounds are available with protective capsules and a small stand. The display stand allows you to put the round inside of its capsule on display in an upright position. There is a Certificate of Authenticity available with your purchase as well.

The obverse of 1921-2021 Morgan Dollar Tribute Rounds comes with the left-profile effigy of Liberty. The design was created in 1878 by George T. Morgan with Anna Willess Williams serving as the model for the design of Liberty. This side of the round has a black ruthenium plating throughout the background field, with a 24-karat gold layer on the effigy of Liberty.

On the reverse of the 1921-2021 Morgan Dollar Tribute Round is the heraldic eagle of the United States. The image shows a bald eagle in front-facing relief as it clutches the arrows of war and the olive branch of peace in its talons. This side of the round also has a black ruthenium plating with the heraldic eagle plated in 24-karat gold.

Please feel free to reach out to Silver.com with any questions. You can call us at 888-989-7223, chat with us live online, or email us directly.