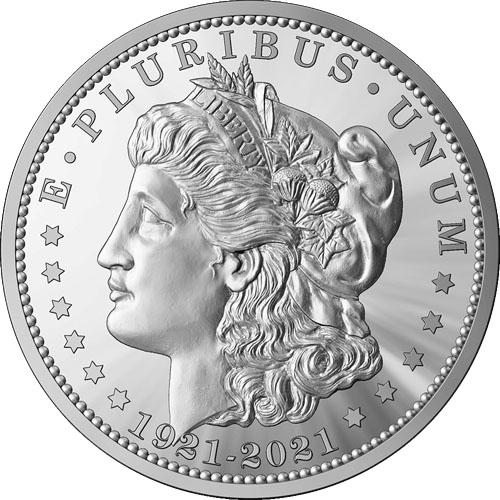 Introduced in 1878, the Silver Morgan Dollar was struck by the United States Mint continuously until 1904 and then again one final time in 1921. The 1921 date mark was significant in many ways for the US Mint. 2021 marks the centennial of that final release of fresh Silver Morgan Dollars. Now, 1921-2021 Morgan Dollar Rounds are available to you for purchase online at Silver.com.

1921 was a big year for the United States Mint and its silver dollar program. No fresh silver dollars had been struck since 1904 when the silver supplies purchased by the Treasury under the Bland-Allison Act ran out. The Pittman Act of 1918 authorized the melting of millions of ounces of circulation silver coins to provide new stores of the metal for the US Mint to use in reintroducing silver dollars.

Production began in 1921, but without a new design. The US Mint’s then-Chief Engraver, George T. Morgan, had to make new dies with his original 1878 design to use in striking 1921 silver dollars. The Silver Morgan Dollar would be struck until December, at which point the new Silver Peace Dollar design was complete and put into production. This made 1921 not only the first year of issue for the Peace Dollar, but also the last for the Morgan Dollar. The change in designs also marked the final redesign of American coinage, ending a project that had started in 1907 with the Gold US Eagle denominations.

The obverse of these 1921-2021 Morgan Dollar Rounds comes with the original effigy of Lady Liberty created in 1878. The left-profile portrait of Liberty depicts her figure wearing a Phrygian cap with a wreath crown and a coronet bearing the word “Liberty.” There are also 13 stars on this field representing the original colonies that formed the United States.

On the reverse side of 1921-2021 Morgan Dollar Rounds is a depiction of the heraldic eagle of the United States. This 19th-century design features a front-facing eagle with the arrows of war and the olive branch of peace in its talons. However, Morgan’s design lacked the US national shield as featured in many other versions of the heraldic eagle.

These 1921-2021 Morgan Dollar Rounds are available to you with individual capsules and a Certificate of Authenticity. These rounds are made from nickel silver, a copper-based alloy that contains 60% copper, 20% zinc, and 20% nickel.