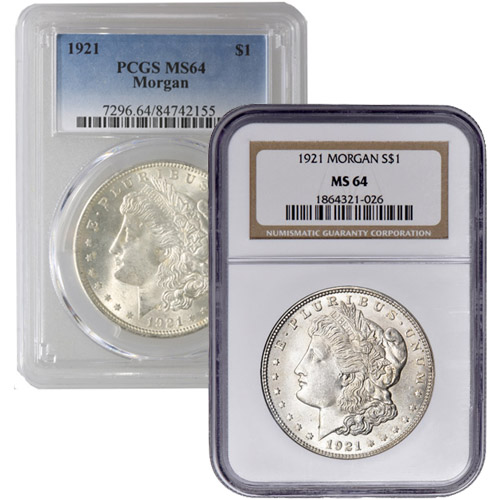 In 1921, silver dollar coining resumed after the Morgan Dollar was halted following the 1904 release. The 1921 release marked the return of the Silver Morgan Dollar, but for just one year as it was replaced in December by the Silver Peace Dollar design. The 1921 Silver Morgan may have been the last issue, but it was far from rare. In total, the US Mint issued 86.73 million Morgan Dollars combined at the Philadelphia, Denver, and San Francisco Mint facilities.

The obverse side of 1921 Silver Morgan Dollar Coins comes with an effigy of Lady Liberty. This design was created by George T. Morgan and shows Liberty’s left-profile bust with a Phrygian cap on her head, as well as a coronet crown and laurel wreath.

On the reverse face of the 1921 Silver Morgan Dollars is a vision of the heraldic eagle of the United States. The heraldic eagle is the oldest American coin design still in use. This 1878 version from George T. Morgan features the bald eagle in front-facing relief with the arrows of war and the olive branch of peace in its talons. There is no US national shield on the eagle’s chest.

These 1921 Silver Morgan Dollars are available with a Mint State 64 grade. Coins in this condition showcase average mint luster and come with possible flaws such as small clusters of contact marks, one or two heavier marks, and small patches of hairlines.