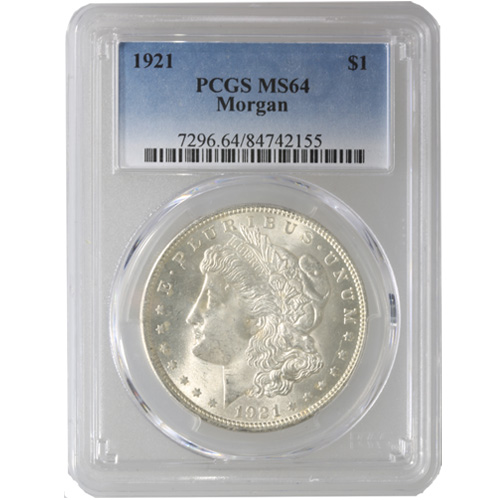 The Silver Morgan Dollar is so-named because it was designed by George T. Morgan, US Mint Assistant Engraver and later the 7th Chief Engraver of the United States Mint starting in 1917. The Silver Dollar coin he designed was released into circulation with the resumption of US silver coining in 1878 and was available through 1904, with a special reintroduction of the coins in 1921 for several months. Now, 1921 Silver Morgan Dollar Coins are available to you for purchase online at Silver.com.

Silver Morgan Dollar coins were initially authorized for production through 1904, with the mandate the US Mint used to produce the coins updated several times. It wasn’t until 1904 that the US Mint’s mandate to continue striking the coins ended. As such, no more fresh silver dollar coining took place from 1905 to 1920. In 1921, the United States Mint resumed silver dollar coining and the Morgan Dollar design was revived. However, it was only struck through December 1921 before being replaced by the Silver Peace Dollar design.

The obverse side of 1921 Silver Morgan Dollars includes a left-profile bust of Lady Liberty. Created by Assistant Engraver George T. Morgan, the image features Liberty with curls in her hair, 13 stars in the edge of the design field, and a date mark.

On the reverse face of the 1921 Silver Morgan Dollar, you will find the heraldic eagle of the United States. Morgan also created this design with an American eagle in front-facing relief as it clutches the arrows of war and olive branch of peace. The nation of issue, face value, and national motto are all visible on this face.

These 1921 Silver Morgan Dollars are available to you in Mint State 64 condition. These coins showcase average luster and strike with clusters of small contact marks, one to two heavier marks, and the possibility of light patches of hairlines and other light scuff marks.