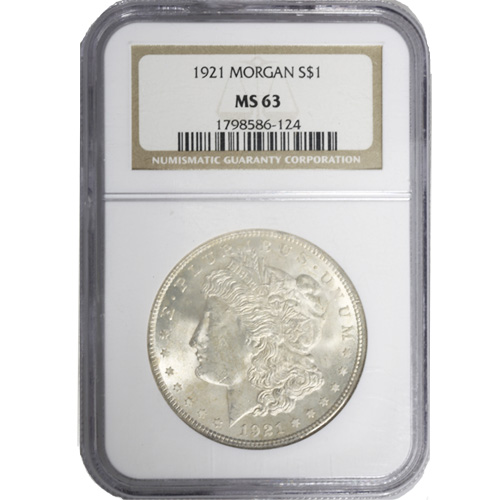 Issued for a total of 27 years, the Morgan Silver Dollars represent the second longest-running design for the US silver dollar and one of two designs to have been issued in separate stints by the United States Mint. Though it was not particularly beloved in its day as a circulation piece, the design of the Morgan Silver Dollar has enjoyed a renaissance among collectors in the 20th and 21st centuries. Now, certified 1921 Morgan Silver Dollars are available to you for purchase online at Silver.com.

The obverse side of the 1921 Morgan Silver Dollars features a left-profile bust of Lady Liberty. George T. Morgan was the designer of this Liberty bust and created a portrait of Liberty with thick curls in her hair, the Liberty coronet, and a wreath crown on her head.

On the reverse face of 1921 Morgan Silver Dollars is a depiction of the heraldic eagle of the United States. Morgan also created this design for the coins and featured the American bald eagle with the arrows of war and olive branch of peace in its talons.

These 1921 Morgan Silver Dollars are available to you with an NGC certification. Mint State 63 coins showcase impaired mint luster. The coins have several small contact marks and a few heavy contact marks. It is also possible for a few larger hairlines to be present. Overall, the coins have an attractive eye appeal.

Silver.com customer service is available to assist you with questions at 888-989-7223. You can also chat with us live online or send us an email with your inquiries.