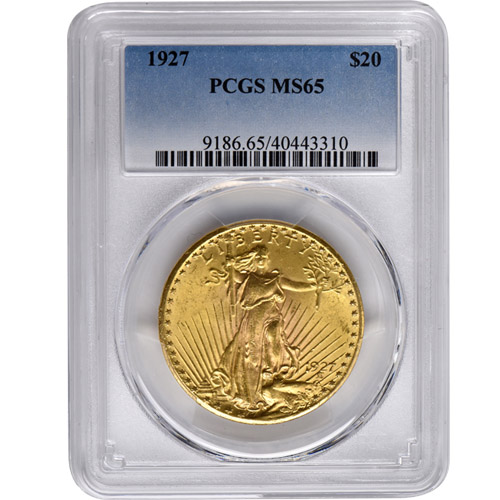 The largest denomination in the Gold US Eagle circulation series was the Gold Double Eagle. Introduced in 1849 and struck annually starting in 1850, the Double Eagle had only two design iterations. The last design was created by Augustus Saint-Gaudens and was the spearhead design in revolutionizing American coinage. The 1927 Gold Double Eagle was one of the lowest minted in the series following its 1920 restart. Now, Mint State 1927 Gold $20 Saint-Gaudens Double Eagles are available to you for purchase online at Silver.com.

The Gold Double Eagle was introduced by the United States Mint in 1849 with an influx of gold coming into the US Treasury following the California Gold Rush. As such, the US Mint was authorized to expand the Gold US Eagle Series, then consisting of Eagle, Half Eagle, and Quarter Eagle coins, to include a new Double Eagle coin with a $20 face value.

Gold Double Eagles debuted with a modified version of Christian Gobrecht’s classic Liberty Head design. Modified for the Double Eagle by James B. Longacre, the Liberty Head design was in use from 1850 to early 1907. By late 1907, this iconic design of Liberty created by Augustus Saint-Gaudens was struck on the coins. From 1907 to 1916, the US Mint annually struck the coins. In the latter stages of World War I and its immediate aftermath, gold bullion prices were surging and Double Eagles stopped circulating as banks held onto the coins and refused to release them at face value. The US Mint stopped coining from 1917 to 1919. In 1920, Gold Double Eagle production resumed and continued until 1933.

1927 Gold $20 Saint-Gaudens Double Eagles listed here have Mint State 65 grades. A coin in this condition showcases above-average, high-quality luster with only small contact marks and hairlines visible. You will notice there are no major detractions within the primary focal points of the coin. Only 3 million coins were struck in 1927, compared to 9 million in 1928, and it is believed only 10% of the surviving coins today are in Mint State conditions. The vast majority of those are Mint State 62 or lower, making these Mint State 65 coins hard to find.

Silver.com customer service is available at 888-989-7223. Our team is available online as well using our live chat and email address features.