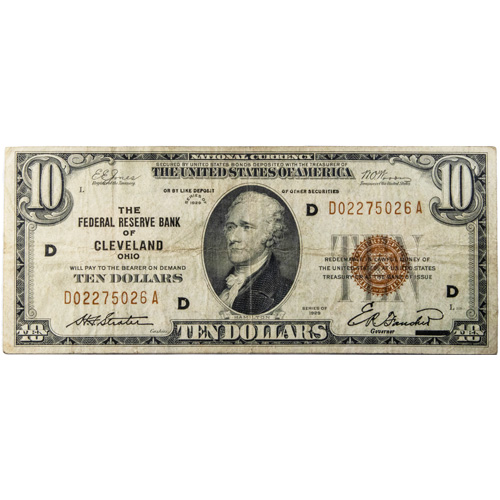 In 1929, the US government introduced a new set of Federal Reserve Bank Notes featuring fresh designs and a smaller size for convenience and efficiency. These were issued in denominations ranging from $5 to $100 dollars and were based on the 1928 Series that initiated the new currency look. However, they differed from the 1928 Series in that they featured brown serial numbers and Treasury seals and were only backed by their issuing Federal Reserve branch. Right now, Very Fine 1929 $10 Federal Reserve Bank Notes are available to purchase online at Silver.com.

All 1929 Federal Reserve Bank Notes will ship to you inside protective plastic currency sleeves. Upon delivery, you will find the notes in Very Fine condition. This means that signs of circulation will be evident, including light soiling and fold marks. The number of folds could range from a few to numerous, depending on the note.

Alexander Hamilton is depicted on the obverse of these Federal Reserve Bank Notes. The design is inspired by the 1805 oil painting by John Trumbull and is the only portrait on modern currency where the subject is facing left. Additional details on the obverse include brown serial numbers, the brown Treasury seal, and the Federal Reserve branch that issued the note.

The US Treasury Building is depicted on the reverse of 1929 $10 Notes. This historic building is located on Pennsylvania Avenue in Washington DC and is the headquarters for the Department of the Treasury. In each corner of the note, numeric and alphabetic depictions of the denomination are visible. Also included are the words The United States of America, Ten Dollars.

If you have questions, Silver.com customer service is here to help. Our team is available on the phone at 888-989-7223, online through our live chat, and via our email address.