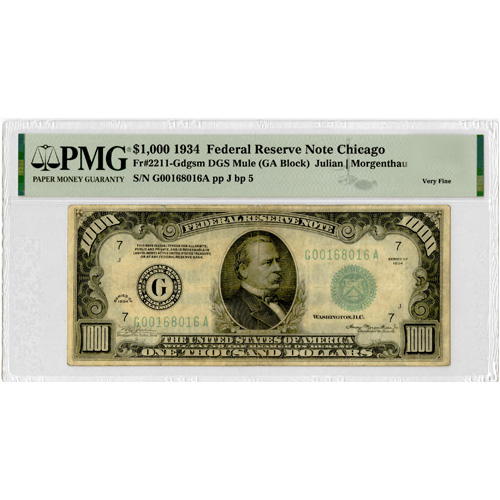 In 1918, the Federal Reserve introduced the second range of Federal Reserve Notes following the 1914 release. The notes issued in 1918 were larger denominations of $500, $1,000, $5,000, and $10,000 and were designed for transactions from bank to bank and from the government to banks. Most of these notes were destroyed starting in the 1960s, which makes the remaining notes very collectible. Now, 1934 $1000 Federal Reserve Notes are available to you for purchase online from Silver.com in certified condition.

These larger denominations were not intended for use by Americans in everyday transactions. In 1918 when the notes were introduced, the average American household had an annual income of just over $1,500. These notes were issued for use in bank-to-bank transactions. This helped facilitate transfers of large sums of money between banks.

On the reverse face of 1934 $1000 Federal Reserve Notes is a simple design concept that offers only the denomination of the note. The 1934 redesign removed a more ornate portrait of the American bald eagle in favor of this clean field with markings of the face value.

These 1934 $1000 Federal Reserve Notes are Very Fine 30 specimens according to the PMG. Each one comes with its own protective currency sleeve. Notes in this condition have light signs of circulation and soiling. The average note of this grade has between 7 and 10 fold lines.

Silver.com customer service is available at 888-989-7223. Our team is also available to you online through our live chat and email address features.