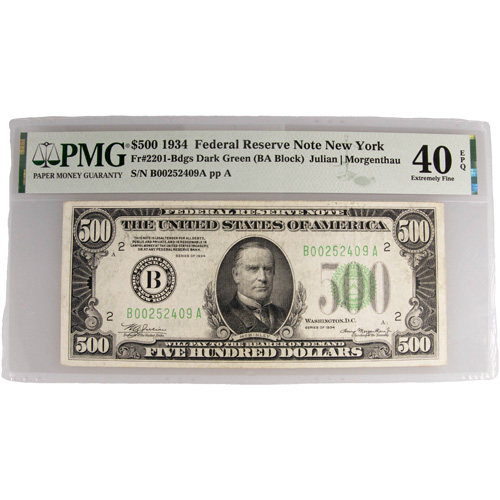 In 1918 Series of Federal Reserve Notes, the Treasury and Federal Reserve introduced large denominations of US bills that would never truly see the light of day. Rather than seeing extensive circulation within the economy, these bills were used for bank-to-bank transfers to facilitate the movement of large sums of money. Despite the lack of broader circulation, few of these specimens survive today. Right now, 1934 $500 Federal Reserve Notes in certified condition are available to purchase online at Silver.com.

Each 1934 $500 Federal Reserve Note available in this listing comes to you with a protective currency sleeve. This plastic sleeve ensures the Extremely Fine 40, or better, condition of the note remains intact. XF 40 refers to notes that show modest wear with three to four fold lines, only one of which is a horizontal fold.

The 1918 Series of notes included denominations of $500, $1,000, $5,000, and $10,000. These denominations were required to facilitate large money transfers from one bank to another. The notes show circulation wear only as a result of these transfers and not as a result of everyday handling in broader circulation. The notes were around until the 1970s when the Treasury and Federal Reserve canceled the denominations and collected the notes from banks. The vast majority were destroyed after the fact.

The obverse of 1934 $500 Federal Reserve Notes comes with a portrait of the 25th President of the United States of America, President William McKinley. The man who led the nation through the Spanish-American War, McKinley won reelection in the 1900 US General Election, but was assassinated in 1901 and succeeded by his Vice President, Theodore Roosevelt.