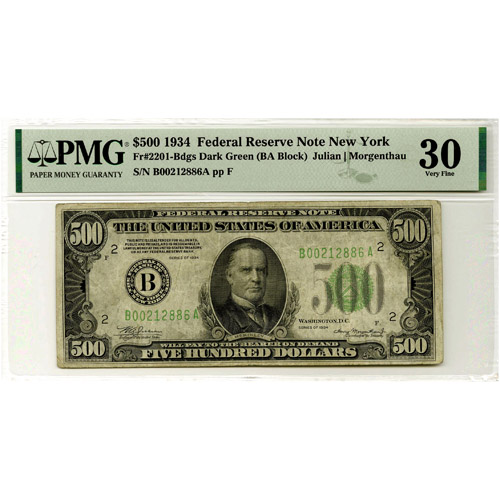 As for the Federal Reserve Note, the four largest denominations were released in 1918 and later redesigned in 1934. The 1934 Series redesign delivered the designs found on the notes in this listing. These designs replaced the original 1918 Series design with John Marshall on the obverse and a vignette of Desoto discovering the Mississippi River.

President William McKinley is found on the obverse of the 1934 $500 Federal Reserve Note. This effigy of the 25th President of the United States remained on the notes until the $500 denomination was removed from circulation starting in July 1969.

These 1934 $500 Federal Reserve Notes are available inside protective plastic sleeves from the PMG. With Very Fine 30 certifications from the PMG, these notes were found to have only light signs of handling and the potential for light soiling. A VF30 note has somewhere between seven and 10 fold lines, with no more than 10 fold lines present.

Silver.com customer service is available to assist you with questions at 888-989-7223. Alternatively, you chat with us live online or simply send us an email with your inquiries.