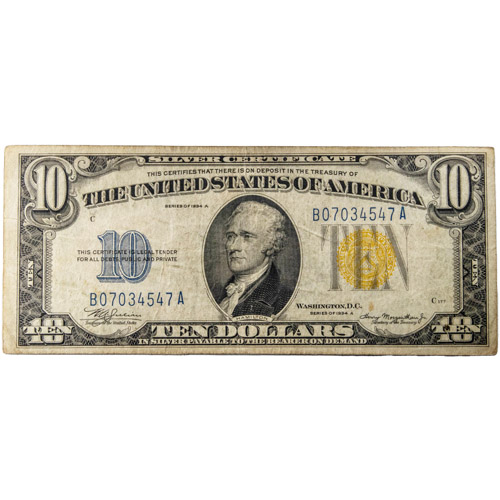 North Africa silver certificates were a special form of currency issued by the US government during World War II. Following Operation Torch, which saw the US and Britain invade North Africa, these emergency certificates were printed with distinctive yellow Treasury seals in denominations of $1, $5, and $10. They were given to soldiers for use, but in the event of an enemy takeover of the region, they could be declared invalid by the US government. Today, 1934a $10 Silver Certificate North Africa Notes in Very Fine condition are available to you online at Silver.com.

In 1785, the United States adopted the silver standard, which enabled currency to be redeemed for physical silver at a bank. This standard continued for nearly 200 years until August 15, 1971, when President Richard Nixon announced that silver would no longer be supplied in exchange for paper notes, and vice versa. Because some silver certificates still exist to this day, they are still recognized as legal tender. However, due to their rarity, they are treated by most as collector’s items rather than currency.

All 1934a Silver Certificate North Africa Notes are delivered to you inside protective plastic currency sleeves. These notes will be in Very Fine condition, meaning light soiling and fold marks may be visible on the surface. These historic notes are perfect for anyone fascinated by World War II or vintage currency in general.

Alexander Hamilton is depicted on the obverse of $10 Silver Certificate North Africa Notes. Hamilton was introduced on the $10 bill in 1928 and has appeared on this denomination of US currency ever since. On either side of the portrait, you will see the blue serial numbers, and on the right side, you will see the distinctive yellow Treasury seal. Signatures by Julian and Morganthau are also shown in the design.

The US Treasury Building is shown on the reverse side of 1934a $10 North Africa Notes. This beautiful piece of historic architecture is located in Washington DC and is the headquarters for the department of the Treasury. Above this rendering are the words The United States of America, and below it are the words Ten Dollars. The denomination is also included in each corner of the note.

Please contact Silver.com if you have any questions. You can call us at 888-989-7223, chat with us live online, or simply send us an email with your inquiries.