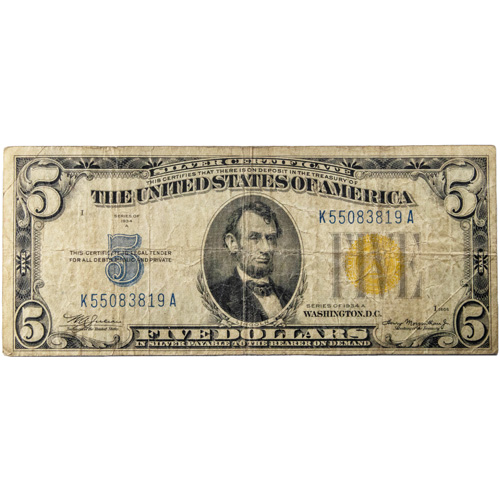 Silver certificates offer fans of paper money a unique opportunity to own a truly historical form of currency. These notes were issued by the United States between 1878 and 1964 and could be exchanged for their physical silver equivalent by banks throughout the country. These special North Africa notes were issued in 1942 for service members during World War II. Their novel yellow seals meant that they could be devalued if they came under the possession of the enemy. Right now, 1934a $5 Silver Certificate North Africa Notes in Very Fine condition are available to purchase online at Silver.com.

These 1934a Silver Certificate North Africa Notes can be purchased with the click of a mouse and delivered directly to your door. These notes are genuine legal tender and prior to 1971 were backed in silver by the United States government. Each one is in Very Fine condition, meaning flaws such as light soiling and fold marks will be evident upon inspection. For protective purposes, we ship each note inside a plastic currency sleeve.

When the United States entered World War II, its Army Chief of Staff George Marshall wanted to engage head-on with the Western European theatre. However, President Roosevelt was more comfortable with the idea of starting off in Northern Africa, where he could assist the British and help set their alliance in stone. Further, the easier task of invading North Africa would serve as a good trial run for the country’s untested military, after which they could more clearly assess their ability to overthrow the Nazi regime. The invasion, known as operation torch, proved successful, and in a mere 8 days the Allied Forces occupied Casablanca, Oran, and Algiers.

The obverse of $5 Silver Certificate North Africa Notes contains a portrait of Abraham Lincoln. Lincoln was introduced on the small-size $5 notes in 1928 and has been present on them ever since. To the right of the portrait, you will see the Treasury seal in yellow ink, and on both sides you will see the serial number in blue ink. Also shown are the words Five Dollars in Silver Payable to the Bearer on Demand.

On the reverse side of 1934a $5 North Africa Notes there is a vignette of the Lincoln Memorial. The groundwork for this historic structure was laid in 1914, and in 1922 it was completed and dedicated before a crowd of over 50,000 on Memorial Day weekend.