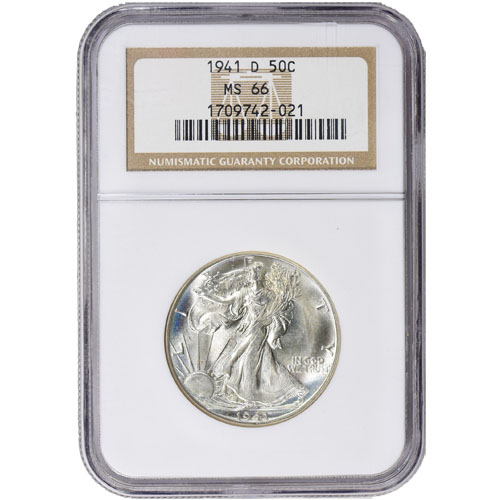 Modern investors are familiar with the Walking Liberty design. Even though it left the circulation 50-cent piece more than 70 years ago, it has featured on a different product from the United States Mint. Since 1986, the US Mint has used Weinman’s creation of Liberty on the obverse of the annual Silver American Eagle bullion coins. It features on all three versions of the coin: bullion, proof, and burnished.

On the obverse of these 1941 Silver Walking Liberty Half Dollar coins is Walking Liberty. She is depicted in left-profile relief as she walks from right to left across the coin’s design field. She is moving toward the sun on the horizon, a symbol of the nation’s march toward an ever-brighter future.

The reverse side of 1941 Walking Liberty Half Dollars includes the image of an American bald eagle resting on the edge of a rock cliff and clutching a small sapling growing from the rock. The bird is depicted rising from the perch with its wings back behind it ready to lift it into the air.

These 1941 Silver Walking Liberty Half Dollar coins earned a Mint State 66 certification from the NGC. That numeric grading indicates the coins have above average luster, no more than three to four small contact marks, and a few light hairlines only visible under magnification. Silver Walking Liberty coins have 90% silver content mixed with copper for greater durability as a circulation piece.