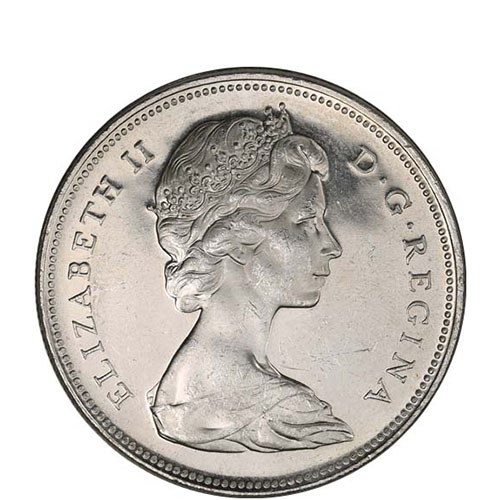 Many nations have issued circulation silver coins over their history which have shown proven longevity in terms of popularity. One of Canada’s greatest silver coin designs came as a result of King George V’s Silver Jubilee celebration in 1935. Right now, 1958 to 1967 Canada Silver Dollar coins are available to purchase online at Silver.com in AU+ condition.

Each 1958 to 1967 Canada Silver Dollar listed here at Silver.com comes to you in Almost or About Uncirculated condition. Coins in this condition show only minor signs of wear on the design elements, and these particular specimens have a “plus” rating with their AU grade. This indicates the coins are in slightly better condition than a typical AU coin.

As King George V celebrated his Silver Jubilee or 25th anniversary as the King of England, the Royal Canadian Mint responded with the issue of a commemorative silver dollar coin. The Canada Silver Dollar was issued from 1935 to 1986 bearing the effigies of monarchs including King George V, King George VI, and Queen Elizabeth II.

On the obverse of all 1958 to 1967 Canada Silver Dollars, you’ll find only Queen Elizabeth II. Her Majesty’s effigy on these coins includes either the first-generation or second-generation design. The former was created in 1953 for the very first Canadian coins issued during the Queen’s long reign and depicts her at age 27.

The second-generation design is more delicate and regal, featuring Queen Elizabeth II in right-profile portrait again with a more ornate crown. The Queen is also shown here with an inscription of “DG Regina,” a shortening of the original first-generation coins’ “Dei Gratia Regina.”

Each 1958 to 1967 Canada Silver Dollar coin showcases the Voyageur design which originated on the Canadian silver dollars in 1935. Recently used by the Royal Canadian Mint on commemorative silver bullion, this design highlights the nation’s history in the fur trade and living off the land. In the design, a European explorer and member of an indigenous tribe paddle a canoe down a creek with the Northern Lights in the background depicted as wavering lines.

If you have any questions about this silver for sale, don’t hesitate to ask. Silver.com customer service is available to you at 888-989-7223, online using our live chat service, or via our email address.