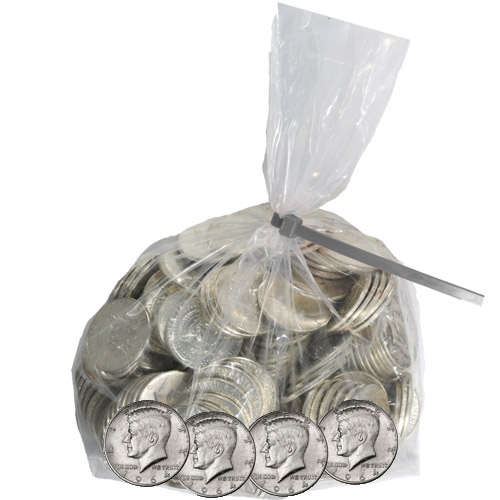 All of the 1964 90% Silver Kennedy Half Dollars in this listing are in Brilliant Uncirculated condition. This listing at Silver.com offers you a zip-tied plastic bag that contains a total of 200 individual US half dollars, all of which have the 1964 date mark. The coins have 90% silver content with 10% copper for balance.

President John F. Kennedy is featured in left-profile relief on the obverse of all 1964 90% Silver Kennedy Half Dollars. This design, along with the reverse imagery, continues in use on the half dollar to this day. The left-profile bust of Kennedy was produced in 1962 by Gilroy Roberts for the Kennedy Presidential Appreciation Medals and later adapted for the half dollar.

A modified presidential seal of the United States of America is found on the reverse of 1964 Silver Kennedy Half Dollars. Created in 1962 in Frank Gasparro for the same Appreciation Medals, this design was also modified slightly for adaptation on the half dollar. The design features the heraldic eagle of the United States with its head looking toward the olive branch of peace in its right talon, while the arrows of war are held tightly in its left talon. The US national shield is on its chest with a ring of 50 stars around its figure.

Please do not hesitate to reach out to Silver.com with any questions. You can call our team on the phone at 888-989-7223, chat with us live online, or simply send us an email with your inquiries.