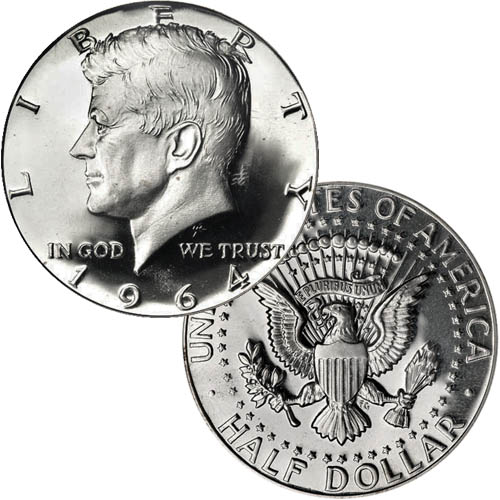 The Kennedy Half Dollar coin design is the most recent added to an American denomination still in circulation today. The Kennedy design was introduced in 1964 and available for just one year, the last year this happened in all coins, with 90% silver content. Today, 90% Silver Kennedy Half Dollars are available to you online at Silver.com.

It took the US Mint and Treasury Department just four months to come up with a design change proposal for the US half dollar to honor the slain President John F. Kennedy. He was assassinated in November 1963, and by January 1964 the new design was ready to go into production at the US Mint replacing the Benjamin Franklin Half Dollar. The coins were ready for circulation by March 1964.

President John F. Kennedy features in left-profile relief on the obverse of all 90% Silver Kennedy Half Dollars. This bust of the president had actually been designed earlier in the decade by Gilroy Roberts for the Kennedy Presidential Medal series.

A modified version of the presidential seal is found on the reverse of the 90% Silver Kennedy Half Dollars. This image is heavily inspired by the heraldic eagle of the United States and comes with the American bald eagle supporting the US heraldic shield as it clutches the arrows of war and the olive branch of peace.

The only coins you will find in this $500 face value bag are those with a 1964 date mark. The Kennedy design debuted that year, the last in which coins had 90% silver and 10% copper content.

Please feel free to reach out to Silver.com with any questions about 90% silver coins. You can call us at 888-989-7223, chat with us live online, or email us directly.