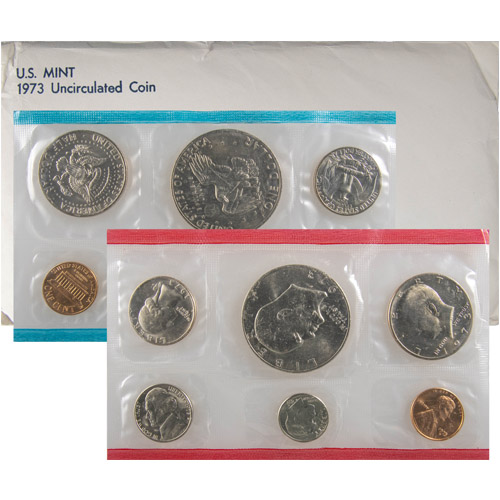 If you are looking for a set of coins that are in brilliant uncirculated condition, then look no further than US Mint Sets. These sets contain specimens of each of the coins used in circulation in a given year. The coins in the sets are from 2 different US Mints, and as such, each Mint’s set is packaged in their own sealed cellophane packaging. And while these Mint Sets have typically contained 10 or 11 coins, in 1973, the Mint Sets contain 13 coins with the addition of the Eisenhower Dollar, one from each Mint. The Eisenhower Dollars were exclusively available in the Mint Sets in 1973, none were made available for circulation. Presently, Silver.com has these 1973 US Mint Sets available for purchase online.

The Mint Sets included dollar coins for the first time in 1973. Both the Denver Mint and the Philadelphia Mint packages included an Eisenhower Dollar. The Eisenhower Dollar increased the number of coins in the set to 13, up from their typical 10 or 11. They also increased the face value of the set from $1.83 to $3.83. However, even more importantly, the issue price of the Mint Sets increased from $3.50 to $6.00.

If you have questions, please reach out to the Silver.com Customer Service team as we are available to assist you. We can be reached via phone at 888-989-7223, via online live chat, or via our email.