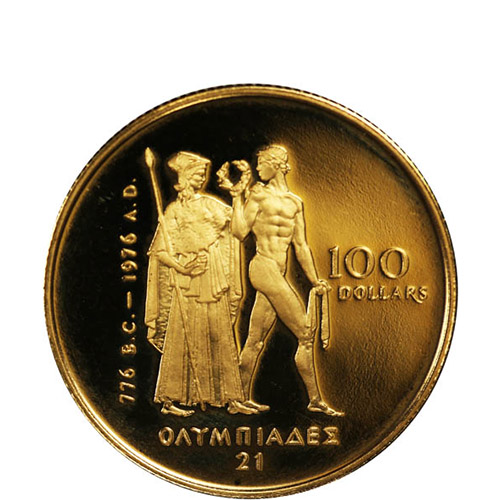 The gold for sale from the Royal Canadian Mint is a well-known symbol of purity and quality in the 21st century. In 1976, however, Canada had not yet introduced any gold bullion coins and only issued commemorative coins with gold content. One of the first was the 1976 Proof Gold Canadian Olympic Coins honoring the 1976 Summer Olympics in Montreal, Quebec. Right now, 1976 $100 1/2 oz Proof Gold Canadian Olympic Coins are available to purchase online at Silver.com.

Each 1976 $100 1/2 oz Proof Gold Canadian Olympic Coin in this listing comes to you with proof visuals, a protective box, and a Certificate of Authenticity. The 1/4 oz gold release in 1976 was a proof coin with frosted designs and mirror-like fields. These coins have a much lower mintage than their 1/4 oz gold counterpart at just 350,000 coins compared to 650,000 coins for the 1/4 oz release. However, while the 1/4 oz gold coin had 14-karat gold content, these impressive specimens boast 22-karat gold. Given the age of these coins, we’d like you to note that it is possible to find wear and tear across the box and COA in this listing.

The designs of the 1976 Gold Canadian Olympic Coins were the same across the 1/4 oz and 1/2 oz issues. Both coins have the Arnold Machin portrait of Queen Elizabeth II on the obverse and an ancient depiction from Greek history of the Ancient Olympic Games on the reverse. The designer of the reverse element was Dora de Pedery-Hunt, who would go on to become the first Canadian to design a monarch portrait for national coins in 1990.

The obverse side of 1976 Proof Gold Canadian Olympic Coins features a right-profile portrait of Queen Elizabeth II. Her Majesty is England’s longest-reigning monarch and this design was just the second used on coins of the realm and the Commonwealth starting in 1965. Designed by Arnold Machin, it featured on Canadian coins from 1965 to 1989.

On the reverse field of 1976 $100 1/4 oz Proof Gold Canadian Olympic Coins is an image of the Greek goddess Athena. She is shown here standing near an Ancient Greek Olympian as she extends an arm to crown him with a laurel wreath.

If you have any questions, please don’t hesitate to contact Silver.com. Our team is available to you on the phone at 888-989-7223, online using our live chat, and via our email address.