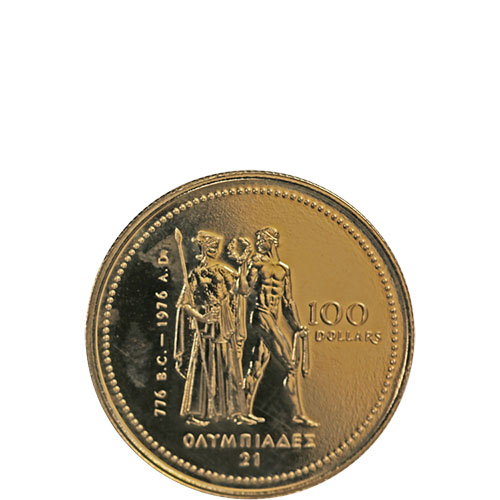 The Games of the 21st Olympics held in Montreal, Quebec, Canada, in 1976 were historic in nature. To this day, the games remain the only Summer Olympics hosted by the nation of Canada. More importantly, though, the 1976 games carried on the tradition of the first Ancient Olympic Games in Greece that were first held in 776 BCE. Now, 1976 $100 1/4 oz Gold Canadian Olympic Coins are available to you for purchase online at Silver.com.

Between 1973 and 1976, the Royal Canadian Mint issued a total of 30 different coins in seven series of commemorative releases ahead of the 1976 Summer Olympics. Montreal, Quebec, Canada, was the first Canadian city to host either version of the modern Olympiad and the RCM, together with the Government of Canada, set a standard that would later be followed in 1988.

The RCM issued 28 silver coins and 2 gold coins from 1973 to 1976 for collectors to purchase. The sale of the coins was designed to help fund the construction costs and other financial burdens associated with hosting the games. The release of the gold coins turned out to be confusing as the RCM issued two coins, both with the same designs and face value, but with differing gold contents and weights.

An Ancient Greek Olympian is depicted alongside the goddess Athena on the reverse of 1976 1/4 oz Gold Canadian Olympic Coins. This design features the goddess offering a laurel crown to the successful Olympian.

These 1976 $100 1/4 oz Gold Canadian Olympic Coins are available to you in protective plastic bags for shipping. These coins in the two-coin gold release were originally offered as uncirculated pieces with 14-karat gold content. Each one of these coins has .583 gold fineness.

Silver.com customer service is available to assist you with any questions when buying gold at 888-989-7223. We are also available online using our live chat and email address features.