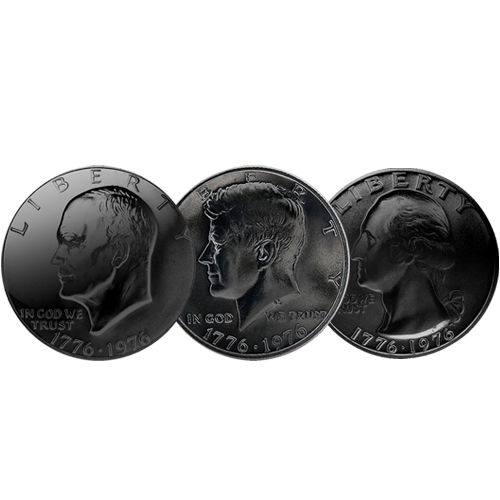 In 1975, the United States announced that the US Mint would celebrate the nation’s bicentennial with the release of new designs on its three largest coin denominations. Known as the Bicentennial coinage, this series brought commemorative reverse designs to the Eisenhower Dollar, Kennedy Half Dollar, and the Washington Quarter. Today, 1976 Bicentennial Black Ruthenium Colorized Coin Sets are available to you online at Silver.com.

All of the 1976 Bicentennial Black Ruthenium Colorized Coin Sets available here come with an Eisenhower Dollar, Kennedy Half Dollar, and Washington Quarter. The coins have a layer of black ruthenium applied to both fields, with colorization on the primary design elements on the reverse of each specimen. The coins are individually packaged in protective capsules with separate display stands and a Certificate of Authenticity.

On the obverse side of the coins in the 1976 Bicentennial Black Ruthenium Colorized Coin Set is the portrait of a different President of the United States of America. The dollar coin features President Dwight D. Eisenhower. The half dollar depicts President John F. Kennedy. The quarter shows President George Washington. Each of these dignitaries is shown in left-profile relief.

Please don’t hesitate to contact Silver.com with your questions. We can assist you on the phone at 888-989-7223, on the web using our live chat, and via our email address.