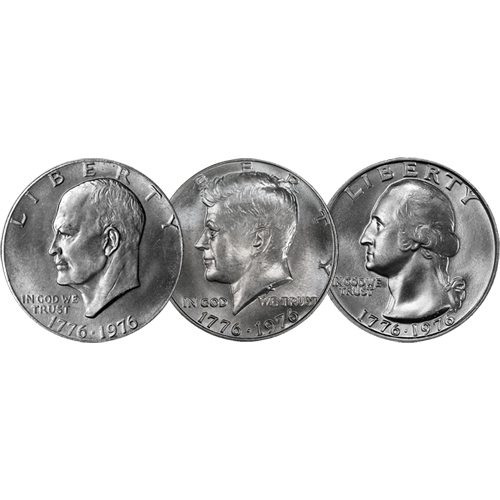 In 1975, the United States Mint began a two-year celebration of the nation’s Bicentennial with the release of new designs on the reverse of the dollar, half-dollar, and quarter-dollar coins. Each denomination continued to feature the same obverse presidential effigies, but received new reverse images honoring the Bicentennial that were issued in 1975 and 1976 only. Right now, 1976 Bicentennial Colorized Coins Sets are available to purchase online at Silver.com.

Each of the 1976 Bicentennial Colorized Coin Sets available here comes with the three aforementioned coins. These coins come from the circulation series of coins struck by the US Mint in 1975 and 1976, meaning that each has a cupro-nickel alloy. The coins are packaged individually in protective capsules and come with individual, small display stands for upright display of the coins. The set comes with colorized applications on the reverse of each coin and a Certificate of Authenticity.

The coins in the Bicentennial coinage from the United States Mint were struck in 1975 and 1976 by the mint, but none of the coins feature a 1975 date mark. The US Mint instead issued the commemorative dual date of 1776-1976 on all of the coins in the release.

The obverse side of each coin in the 1976 Bicentennial Colorized Coin Set features the effigy of a former United States President. None of these designs were altered in any way for the Bicentennial coinage release, with President Eisenhower on the dollar, President Kennedy on the half dollar, and President Washington on the quarter.

On the reverse face of the 1976 Bicentennial Colorized Coins in this set, you will find not only new design elements used only in 1975-1976, but also a unique application of colorized lacquers that is exclusive to this set. The coins all have the red, white, and blue of the American flag in the background. However, each coin has its own primary design for the Bicentennial. The Liberty Bell is superimposed in front of the Moon on the dollar. Independence Hall features on the half dollar and a Continental Army drummer is found on the quarter.