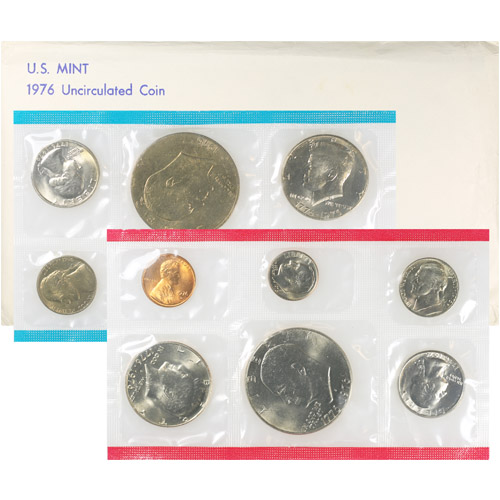 The US Mint Sets contain specimens of each of the coins used in circulation in that particular year, and the coins are in brilliant uncirculated condition. The coins come from 2 different US Mints, and as such, each Mint’s set is packaged in their own sealed cellophane packaging. Since 1976 is America’s Bicentennial year, 3 denominations of the coins included in the 1976 Mint Sets have special commemorative reverse designs. And being the Bicentennial year, the US Mint also issued a Silver 3 Piece Mint Set. This set contains only those 3 coins with the commemorative reverse designs, and were struck in 40% silver at the San Francisco Mint. The sales of the Silver 3 Mint Set continued beyond 1976 for a couple of years, allowing it to reach sales of 4,908,319 sets. The regular 1976 Mint Set, containing 12 coins, reached sales of 1,892,513 sets. Right now, Silver.com has these 1976 US Mint Sets available for purchase online.

Have questions? Please reach out to the Silver.com Customer Service team as we are available to assist you. We can be reached via phone at 888-989-7223, via online live chat, or via our email.