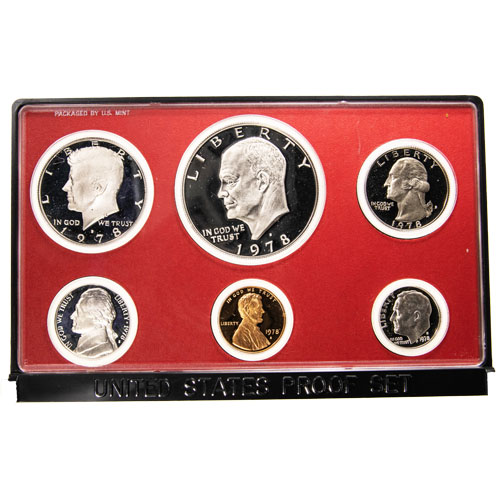 The 1978 US Mint Proof Set was the final year that the set included the Eisenhower Dollar, which was the last full-sized Dollar the US Mint produced. The Mint did sell 3,127,781 of the 1978 Proof Sets, just slightly down from 1977 Proof Set sales. The 1978 set is still a 6 coin set, and nearly all of the coins will have deep cameo finishes. Some of the 1978 Proof coins even received perfect grades of PR70 or PF70 from PCGS or NGC. This set was made by the US Mint in San Francisco. Currently, Silver.com has these 1978 US Mint Proof Sets available for purchase.

Each coin in the set is placed in an individually sealed ring and positioned on a red felt-covered paper insert. The insert is sealed in a two-piece clear plastic case. This plastic case is then inserted into a black plastic frame which can be opened and used as a stand to display the coins. The beauty of the coins is very visible against the red background. This is the same packaging that has been used for Proof Sets since 1973.

The Lincoln Cent obverse features the right-facing profile of Abraham Lincoln designed by sculptor Victor David Brenner. Brenner was retained by the US Mint in January 1909 to design a cent depicting the late President. It became the first widely circulated design of a US President on a coin, and is still the obverse of the Lincoln Cent today.

The Lincoln Cent reverse features the Lincoln Memorial designed by Frank Gasparro. The Mint decided to have an internal competition among the Mint’s engravers to come up with the next reverse design. In spite of the fact that Gasparro had never seen the Lincoln Memorial in person, then-Secretary of the Treasury Robert Anderson felt Gasparro’s design was an impressive image of the Memorial.

Have questions? The Silver.com Customer Service team has the answers. We can be reached via phone at 888-989-7223, via online live chat, or via our email.