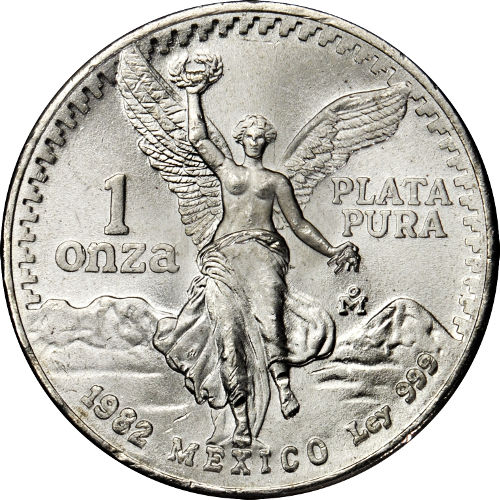 Silver Mexican Libertad coins are based upon the popular gold Centenario coin produced by the Mexican Mint between the 1920s and 1950s. The design features used on the Centenario included the angel of independence and the nation’s coat of arms. Both images were reinvented and introduced on the modern sovereign coin. These images stem from the nation’s centennial celebration of its independence, which started in 1920.

On the obverse side of the coin, Winged Victory is featured in full-length figure striding forward. In her right hand, she holds a wreath crown a loft as a symbol of a freedom. In her left hand, she holds the shattered chains of Spanish colonial rule. Engravings on this side include “1 Onza,” “Plata Pura,” and “1982 Mexico Ley 999.”

The reverse side of the coin bears the coat of arms for Mexico. In the image, a bald eagle is visible atop a cactus perch. The bald eagle is depicted in battle with a serpent, clutching the creature in its beak and talons in a bid to control it. The engraving “Estados Unidos Mexicanos” is featured above the seal.

All Silver Mexican Libertad coins are produced by the Mexican Mint. Founded by Spanish conquistadors in 1535, the Mexican Mint is one of the oldest facilities in the world, and the oldest operating facility in the Western Hemisphere. Each coin bears an “MO” mint mark.

If you have questions about these coins, a Silver.com associate will be happy to answer them. In addition to calling us at 888-989-7223, you can reach a Silver.com team member online through our website’s live chat and email services. If you are interested in similar products, be sure to check out our full supply of Mexican Silver Libertads.