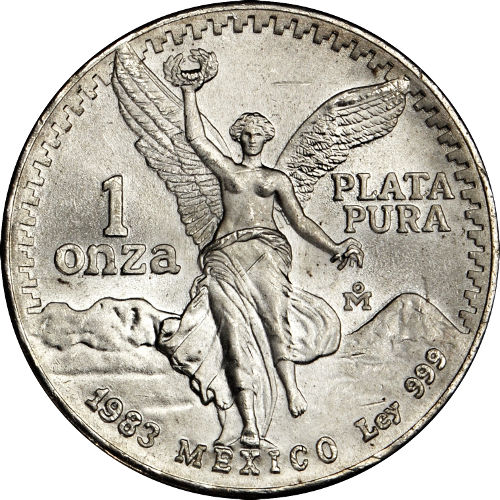 Sovereign coin programs are often popular among investors and collectors for a variety of reasons. In addition to impressive design features, most of these coins have high purity levels and weights that are guaranteed by national governments. The Silver Mexican Libertad is gaining notoriety across the globe currently, and right now the 1983 1 oz Silver Mexican Libertad coin is available on Silver.com.

The Mexican Libertad coin program was launched in 1982 with a 1 oz coin that featured images used by the government during the 1920s as the nation celebrated 100 years of independence. The angel of independence was a symbol of the nation’s victory over Spain, and featured prominently on the historic gold Centenario. Additionally, ancient Aztec cultural symbols appeared on the coin, along with the coat of arms for Mexico.

On the obverse of each coin are the symbols of Mexican freedom and pride. In the background, the twin volcanic peaks of Popocatepetl and Izticcuahtl rise to meet the sky. The peaks are named after two Aztec lovers whose relationship met a sad, tragic end. The statue of Winged Victory is featured in the foreground, holding broken chains and a wreath crown.

The reverse side of the coin displays the nation’s official emblem. In the seal of Mexico, a bald eagle is depicted atop a cactus branch as it battles an evil serpent. The image is indicative of the country’s struggle to free itself from the grip of Spanish oppression. The engraving “Estados Unidos Mexicanos” translates to English as “United Mexican States.”

Mexico’s official national mint, the Mexican Mint, strikes Silver Mexican Libertad coins under the authority of Banco de Mexico. Founded in 1535, it is among the world’s oldest operating facilities.

If you have questions for a Silver.com associate, we have a number of ways for you to contact us. We’re available on the phone at 888-989-7223, online through our live web chat, or via email. Looking for similar products? Be sure to check out the rest of our Silver Mexican Libertads.