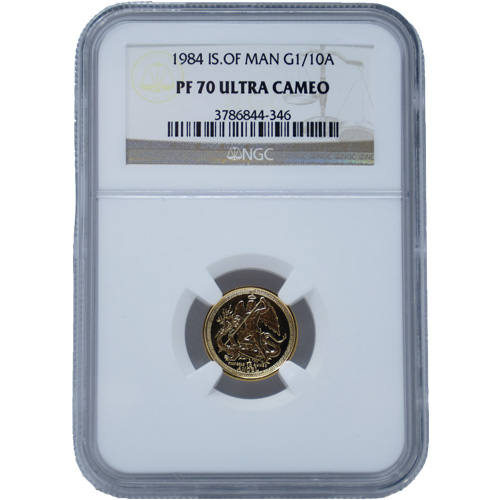 As one of the longest-running gold coins for sale, the Isle of Man Gold Angel is once again back with the 1984 coin. The Isle of Man Gold Angel coin series began in the early 1980s and has since continued to be available from the Pobjoy Mint in England. This coin series is based on the angel noble, the historic gold coin in England. Now, you can purchase the 1984 1/10 oz Proof Isle of Man Angel Gold Coin NGC PF70 UCAM from Silver.com.

First issued in England in 1465, the English Angel gold coin was released during the reign of the Yorkist monarch, King Edward IV. The Isle of Man Series of Angel Gold Coins closely resembles the original English Angel coins and borrows from their design. On newer coins such as the 1984 coin, the effigy of St. Michael the Archangel remains, but the monarchy is portrayed differently with the portrait of Queen Elizabeth II on the obverse.

On the obverse of the 1984 1/10 oz Proof Isle of Man Angel Gold Coin NGC PF70 UCAM, the right-profile portrait of Queen Elizabeth II is shown. This portrait design has been reimagined each year the Isle of Man Series of Angel Gold Coins have been released from the Pobjoy Mint. The coin’s year of issue is also featured on the obverse.

The reverse of the 1984 1/10 oz Proof Isle of Man Angel Gold Coin NGC PF70 UCAM shows an image of St. Michael the Archangel slaying a dragon with a long spear. The reverse also features the purity and weight of the coin below St. Michael.

If you would like to learn more about the gold for sale in this listing, the team at Silver.com can answer any questions. Contact us today at 888-989-7223, or chat with us via email or live online chat.