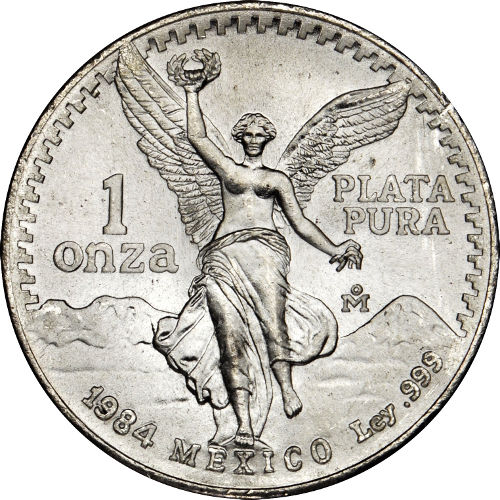 In 1982, the Mexican Mint introduced the Silver Mexican Libertad as the nation’s sovereign coin. Unlike other sovereign coin programs, these early Silver Libertads have a slightly different design than the modern coins. The position of engravings has been altered in recent years, and Winged Victory is now depicted as she appears on a statue in Mexico City.

On the 1984 1 oz Silver Mexican Libertad, Winged Victory is depicted in full-length figure with a front-facing orientation on the obverse. Known as the angel of independence, she can be seen walking forward with a crown wreath in her hand, symbolizing freedom, and the broken bonds of Spanish colonialism symbolized by the chains in her left hand.

The obverse side of the coin bears a number of identifying engravings. Included are the coin’s weight, metal content, purity, year of minting, face value, and the Mexican Mint’s official mint mark.

On the reverse side of all coins is the image of the nation’s coat of arms. The seal depicts a bald eagle as it is locked in combat with a serpent. Perched atop a cactus branch, the eagle uses one talon to control the snake’s body as it fights it off with its beak.

The Mexican Mint was established by Spanish conquistadors in 1535 to produce gold and silver bars to send home to Spain. It is one of the world’s oldest facilities, and is the oldest operating facility in the Western Hemisphere.

If you have questions for a Silver.com associate, don’t hesitate to reach out to us at 888-989-7223. You can also connect with us online through our live web chat and email services. If you are looking for similar products, make sure to check out our entire selection of Mexican Silver Libertads.