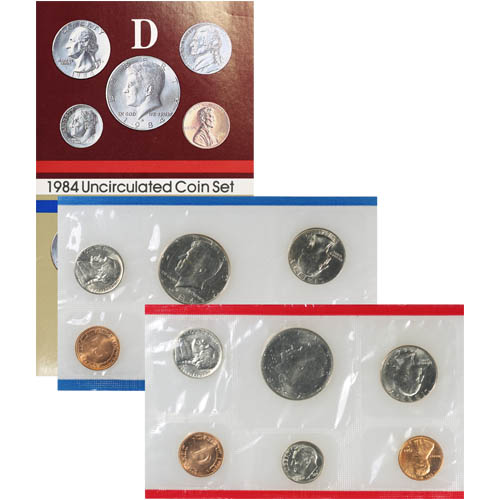 These official Mint Sets, issued by the US Mint, contain uncirculated specimens of each of the coins used in circulation in 1984. The coins in the Sets are in brilliant uncirculated condition and are issued in official government packaging. The US Mint produces these coins using base metals, thus they are generally less expensive than Proof Sets of the same year, making them easier to purchase for collectors or those people wishing to begin collecting. And since they are issued by the government, their quality and authenticity is guaranteed. The 1984 Mint Set contains 10 coins. Right now, these 1984 US Mint Proof Sets are available for purchase online from Silver.com.

Each Mint Set contains two packages – one 5 coin package from the Denver Mint and one 5 coin package from the Philadelphia Mint. Each Mint’s package contains one each of the Lincoln Cent, Jefferson Nickel, Roosevelt Dime, Washington Quarter, and Kennedy Half Dollar. Also included in each package is a cent-sized token indicating which Mint produced the coins in that particular package.

The Lincoln Cent obverse features the right-facing profile of Abraham Lincoln that was designed by sculptor Victor David Brenner in January 1909. Brenner had been retained by the US Mint to design a cent depicting the late President. It became the first widely circulated design of a US President on a coin, and is still the Lincoln Cent obverse today.

The Lincoln Cent reverse features the Lincoln Memorial. This design was the result of an internal competition among the Mint’s engravers that was won by Frank Gasparro.