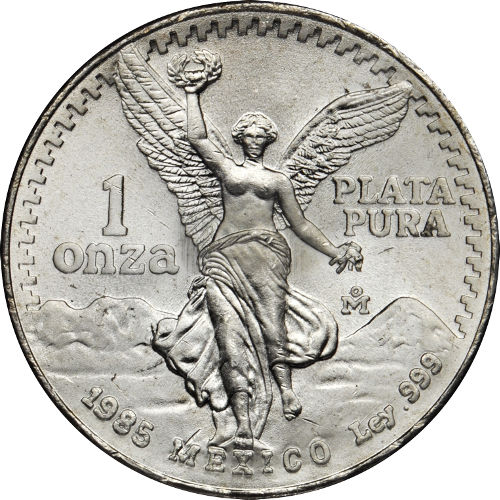 The Mexican Mint first introduced the nation’s official bullion coin in 1982, but it featured design sets that dated back to the 1920s. The Silver Mexican Libertad has been produced annually since that date, and continues to honor the country’s victory in the War of Independence against Spain. Right now, the 1985 1 oz Silver Mexican Libertad coin is available through Silver.com.

Mexico’s Silver Libertad was first struck in a one ounce, bullion version in 1982. Through the first nine production years, only the one-ounce weight was available. In 1991, the program expanded to include four fractional-weight coins. In 1996, the program was further expanded to offer two ounce and five ounce coins, as well. Today, Libertads are struck in seven weights in the bullion and proof versions, as well as a proof-like 1 kilo coin, and five weights in a gold version of the coin (proof and BU).

On the obverse side of these 1985 1 oz Silver Mexican Libertad coins is the image of the angel of independence. She is featured striding forward confidently, with a crown wreath held aloft in her right hand, and the broken chains of Spanish rule in her left hand. The “MO” mint mark is engraved on this side, along with the coin’s face value, metal content, purity, and year of minting.

The reverse side off each coin bears the coat of arms of Mexico. With a bald eagle perched atop a cactus branch, the official seal of Mexico includes the engraving “Estados Unidos Mexicanos.” Translated into English, this phrase means “United Mexican States.”

The Mexican Mint is one of the oldest in the world, having been established by Spanish conquistadors in 1535. Today, it produces the Silver Mexican Libertad under the guidance of Banco de Mexico.

If you have questions about these Silver Mexican Libertad coins, please feel free to call a Silver.com associate at 888-989-7223. You can also reach out to us online through our live web chat and email services. If you are interested in similar products, be sure to check out our full collection of Mexican Silver Libertads.