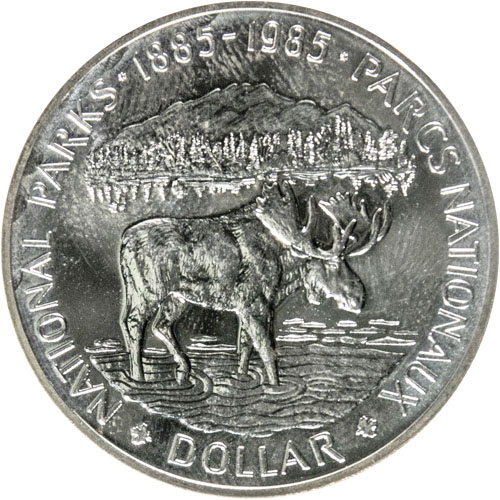 When a coin is released as part of a special anniversary celebration, it becomes almost immediately collectible. And seeing as centennial celebrations only come around once every 100 years, 100th-anniversary coins can be highly sought after. You can score a 1985 Proof Silver Canadian National Parks Moose Dollar Coin for your collection from Silver.com.

The coin arrives in a clear protective plastic capsule. The capsule helps keep your item safe during transport and provides a convenient option for storing or displaying it once it arrives.

The obverse of the 1985 Proof Silver Canadian National Parks Moose Dollar Coin features an image most coin collectors are familiar with. It’s the 1968 portrait of Queen Elizabeth II created by Arnold Machin. Every so often, the British Royal Mint calls for an updated version of the queen’s portrait for official use on coins. Thus, there are five sanctioned images for official British coins, this being the second. Some other mints across the globe have used other images of the queen, though the five official ones are primarily used.

On the reverse side is an image worthy of the 100th Anniversary of the Canadian National Parks. It depicts a moose standing in shallow water against a beautiful wilderness background. A lake, forest and mountain are all included in the image. The surrounding inscriptions spell out the face value of the coin, give the 1885-1985 centennial dates and spell out the phrase National Parks in English and French.

This is a beloved coin for many reasons. The gorgeous depiction of the Canadian rustic landscape, the detailed image of the moose and the relevancy to the much-loved national parks system in Canada are all reasons this coin is scooped up by collectors quickly and can be hard to find. Get yours today at Silver.com.

You can place an order online or call us for assistance. Reach out via 1-888-989-7223 if you have any questions about silver for sale or use our email or chat options to connect with a helpful rep online.