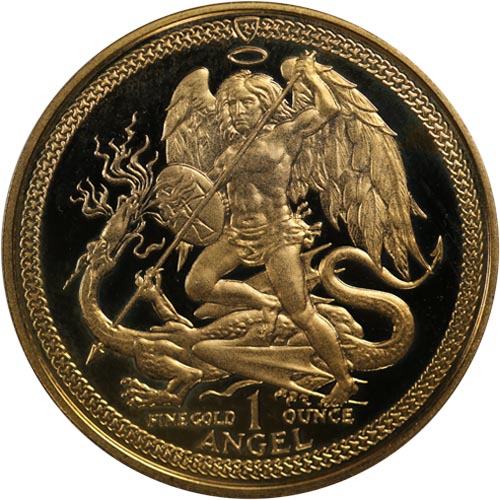 Isle of Many Angel coins have been available since 1984. The first issues in the series were platinum and gold coins, with a silver option joining the series in 1995. The Pobjoy Mint has been behind the design and release of these coins since 1984, with the images of both Queen Elizabeth II and the Archangel Michael changing with time.

The obverse imagery on the 1986 1 oz Gold Isle of Man Angel Coins comes with a depiction of Queen Elizabeth II. The first effigy of the Queen used on this series, this design is the Pobjoy Mint’s design and is based on the Raphael Maklouf bust of Elizabeth II created for the Royal Mint in 1985. This young image of the Queen shows the monarch wearing the George IV State Diadem Crown.

On the reverse side of 1986 Gold Isle of Man Angels is a depiction of the Archangel Michael. In this design, he is featured slaying a dragon by driving a spear through its neck. He holds a shield emblazoned with the Christian cross that protects him from the fire the dragon belches forth from its mouth.

Silver.com customer service is available to assist you with questions at 888-989-7223. Additionally, we are available online using our live chat and email address features.