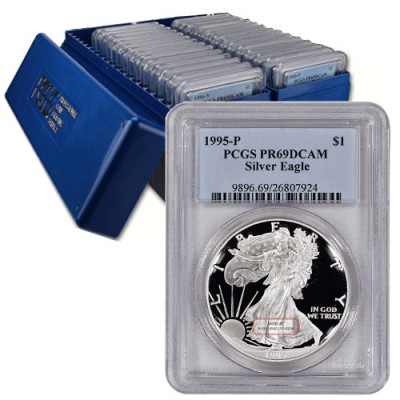 The United States Mint celebrates the 30th anniversary of its beloved American Eagle coin series. Available since 1986 in bullion and proof, the American Silver Eagle and American Gold Eagle are among the most popular coins in the world today. Right now, Silver.com offers a 30-Coin set of 1986 to 2016 Proof American Silver Eagles, and each comes with a PR69 certification from the Professional Coin Grading Service.

The American Silver Eagle coin was first introduced in 1986, and the program at that time included only a 1 oz bullion specimen and a 1 oz proof specimen. Today, the program has grown to include a 1 oz burnished version of the coin, which was unveiled in 2006 during the 20th anniversary celebration.

Each of the individual Proof American Silver Eagle coins in this 30-coin collectible set has a grade of Proof 69 from the PCGS. Coins in this condition exhibit full, original luster, but also feature a maximum of two minor detracting flaws on the surface.

The Proof American Silver Eagle coin set does not include a 2009 proof specimen because the US Mint halted production of the proof specimens that year. The Great Recession, which peaked in 2009, was the reason cited for the lack of proof coins made available in 2009.

On the obverse of all coins in this set you’ll find the Walking Liberty design from Adolph A. Weinman. This design first appeared on the Walking Liberty Half Dollar from 1916 to 1947. Former US Mint Chief Engraver John Mercanti designed the heraldic eagle image on the reverse. This design has featured on American currency since the first coins struck at the Mint, but Mercanti’s depiction is decisively modern.

If you have any questions about this one-of-a-kind 30-coin set, please feel free to contact Silver.com. Our associates are available at 800-276-6508, online using our live chat feature, or by submitting questions to us via email.