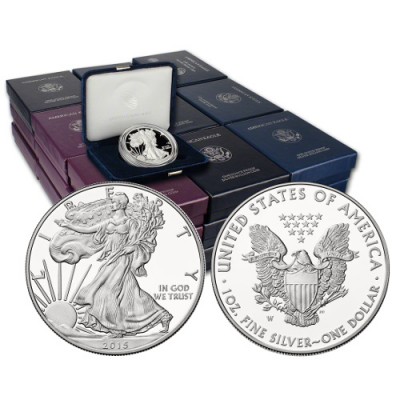 There is no coin from the United States Mint more popular than the Silver American Eagle. Available since 1986, this coin is the official silver bullion product of the United States and is available in a bullion version as well as two collector’s options. The Proof Silver Eagle is immensely popular with collectors, and you now have a chance to purchase all 31 coins issued from 1986 to 2017! Right now, the 1986-2017 Proof Silver American Eagle Coin Set is available to purchase online at Silver.com.

Each of the 31-coin 1986-2017 Proof Silver American Eagle sets in this listing ships to you in a box courtesy of the US Mint. The set features all 31 coins produced by the mint between 1986 and 2017, and features a Certificate of Authenticity. If you’re doing the math and realize the set is one short, you’re correct.

Proof Silver American Eagle coins have been struck every year by the United States Mint, except for 2009 when demand for the bullion version of the coin and silver blank shortages forced the mint to focus solely on its bullion coinage. As such, there is no 2009-issue Proof Silver Eagle available for this set.

On the obverse of the Silver American Eagle you’ll find the image of Walking Liberty that graced the nation’s half-dollar coin from 1916 to 1947. The design was created by Adolph A. Weinman and features Liberty as she walks toward the setting sun, wearing the American flag around her shoulders. It is symbolic of America’s strive to find a brighter future at all times.

The reverse of all 1986-2017 Proof Silver Eagles bears the heraldic eagle of the United States. Refined for these coins by John Mercanti, former Chief Engraver of the United States Mint, it depicts the American bald eagle behind the nation’s heraldic shield, with arrows in one talon and an olive branch in the other.

All Proof Silver American Eagle coins are produced at the West Point Mint facility. You’ll find a “W” mint mark on the coin’s reverse face below the olive branch in the eagle’s talon in the lower-left field.

If you have questions, feel free to ask. Silver.com associates are available at 888-989-7223, online using our live chat, and via our email address.