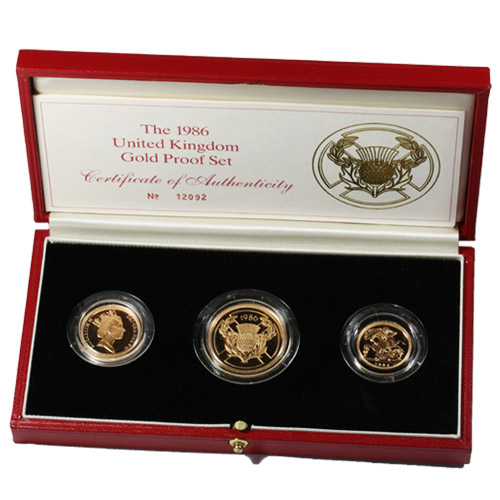 The first time the Royal Mint of England issued a sovereign gold coin set to mark a sporting event was in 1986 when Scotland hosted the Commonwealth Games. The eighth installment of the games was hosted in Edinburgh in July and August of that year and the Royal Mint honored the event with three gold coins in a limited-issue set. Right now, 1986 Proof Gold British 3-Coin Sets are available to purchase online at Silver.com.

Each 1986 Proof Gold British 3-Coin Set comes with three coins in total housed together inside of a three-coin set. The commemorative box features a red exterior and has three slots to house each of the coins individually. Also included with your purchase today is a Certificate of Authenticity from the Royal Mint of England.

The obverse of the Gold British Sovereign, Gold British Half Sovereign, and 2 Pound sterling Scottish Thistle coins in this set feature the image of Queen Elizabeth II. This is the third-generation effigy from Raphael Maklouf that was used on British denominations from 1984 to 1997, at which point it was replaced by the famous Ian Rank-Broadley design.

On the reverse of the Gold British Sovereign and Gold British Half Sovereign coin, you will find a depiction of St. George slaying the dragon. The image of St. George riding his fearless steed into battle against the dragon was created in 1817 by Benedetto Pistrucci for the new Gold Sovereigns issued in that same year. The reverse of the 2 Pound sterling gold coin in the set has the Scottish thistle, the official flower of Scotland. The thistle was used to honor Scotland as the host nation of the Commonwealth Games.

The XIII Commonwealth Games was hosted in Edinburgh and was the subject of an intense boycott. 27 nations participated, but 32 members of the Commonwealth nations boycotted and skipped the games.

If you have any questions about this gold for sale, please don’t hesitate to ask. Silver.com customer service is available to you at 888-989-7223, online using our live chat, and via our email address.