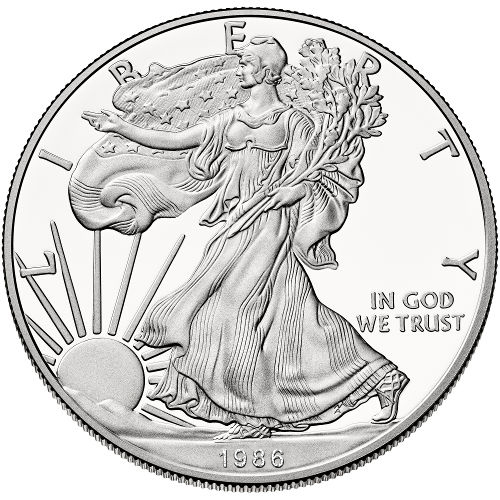 In 1986 the United States Mint made a move to establish itself as a major player in the precious metals industry. Increasing demand for bullion coins in the global market led to passage of the Liberty Coin Act in 1985 by Congress. This paved the way for the US Mint to introduce the Silver American Eagle, the nation’s first and official silver bullion coin. Today, the 1986-S Proof Silver American Eagle coins are available on Silver.com with commemorative boxes.

The San Francisco Mint was home to the Silver American Eagle coin program for the first 7 years of proof production, and the first 13 years of bullion production. When the first coins were struck at the mint in October 1986, then-Secretary of the Treasury James A. Baker II said “I don’t need a pick and shovel to start the San Francisco Silver Rush of 1986.”

On the obverse of all Silver American Eagle coins is the image of Walking Liberty. Originally created in 1916 by Adolph A. Weinman and used on the Walking Liberty Half Dollar until 1947, this design had been collecting dust in the archives for 39 years before the US Mint revitalized it for use on the nation’s official silver coin.

The reverse features a depiction of the heraldic eagle created by former-Chief Engraver of the United States Mint John Mercanti. His design is a modern take on a government symbol that has featured on American coins dating back to 1794. 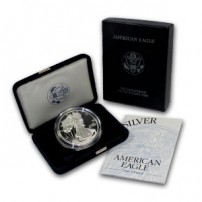