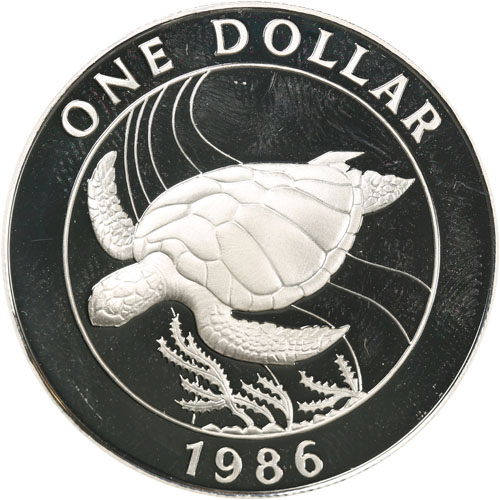 The World Wildlife Fund coins are a fun and valuable addition to your collection. They were minted in limited quantities, making them somewhat rare, and they feature a selection of endangered wildlife and other relevant images. The 1986 .8410 oz Silver Bermuda Sea Turtle Dollar Coin is one of a number of coins minted for the 25th anniversary of the World Wildlife Fund.

On the obverse of this coin, you’ll find a bust of Queen Elizabeth II. The Queen’s image has been captured in portraits for coins a number of times throughout the years, each depicting a more accurate image of Her Majesty at whatever time in her life it was made. This particular image was created by Raphael Maklouf for use on coins starting in 1985. It was used through 1997 and was replaced on coins in 1998 with an updated image of the monarch.

The reverse of the 1986 Silver Bermuda Sea Turtle Dollar Coin celebrates a love of wildlife and the WWF’s mission of conservation and saving endangered species. The image is of a sea turtle swimming in the ocean. The sea turtle is one of the most well-known endangered species on the planet. The WWF works to stabilize habitats and work against other factors that have driven many sea turtle species to become endangered, including overharvesting and hunting.

Your coin arrives in a clear capsule that protects it during shipping and offers an easy way to store and display it in your collection. Only 25,000 Silver Bermuda Sea Turtle Dollar Coins were minted in 1986, so these are hard to come by.

Whether you’re looking to round out your set of 25th anniversary WWF coins or you collect coins with animals on them, this is a coin to jump on when you see it. Order it today on Silver.com or call us at 1-888-989-7223 to find out more about ordering processes or our coins. You can also reach out for assistance via chat or email when you buy silver.