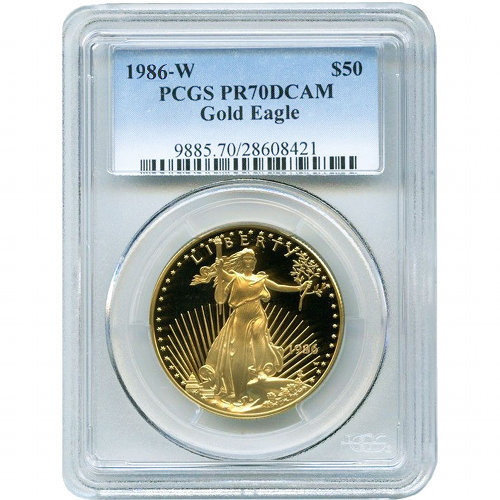 Each 1986-W 1 oz Proof Gold American Eagle in this Silver.com listing is a perfect specimen according to the PCGS. Coins in this condition exhibit full, original mint luster and bear no detracting flaws of any kind.

On the obverse of all Gold American Eagle coins you’ll find Augustus Saint-Gaudens’ image of Lady Liberty. Created in 1907 by Saint-Gaudens, this is considered the greatest American coin design of all time and featured on the Gold Double Eagle from 1907 to 1933.

These 1986 Gold American Eagles represent the first-ever release of the nation’s popular gold bullion coin program. 1986 marks the only year in which there was only one weight available in the proof version of the coin, with fractional-weights not added until 1987 and 1988.

Graded Proof Gold American Eagle coins are sought after in anticipation for gold’s continued historic value. You can monitor gold and silver prices minute by minute via our active charts.

If you have any questions, please contact Silver.com at 888-989-7223. You can also connect with us online using our live web chat or email services.