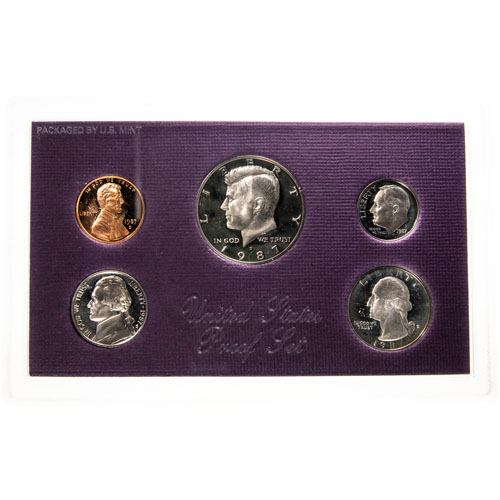 The US Mint sold 3,792,233 of the 1987 Proof Sets. This was the third-highest sales of any Proof Set in the 1980’s. Since no new Kennedy Half Dollars were available in circulation, the only way collectors and others could get their hands on them was by purchasing either a Proof Set or a Mint Set. The 1987 Proof Set continued as a 5 coin set with a face value of $0.91. Deep cameo finishes will be found on nearly all coins in the Set, courtesy of the minting technology improvements that were being made at that time. This Set was made by the US Mint in San Francisco. Currently, these 1987 US Mint Proof Sets are available for purchase online from Silver.com.

All of the coins in the Proof Sets – the cent, nickel, dime, quarter, and half dollar – go through modifications of their designs through the years. In 1987, the Jefferson Nickel modifications consisted of sharpening the looks of his hair and details of the Monticello. Since 1987, it is fairly common to find some well-struck nickels with six full steps on the reverse.

Each Proof Set contains one each of the Lincoln Cent, Jefferson Nickel, Roosevelt Dime, Washington Quarter, and Kennedy Half Dollar.

The 1987 Proof Sets utilized the packaging design of the previous couple of years. Each coin had its particular slot within a textured purple cardboard holder. This purple holder was sealed in a plastic holder, which was then placed into a purple outer box, with a flap at the top to open and close the box.

If you have questions, please reach out to our Silver.com Customer Service team. We can be reached via phone at 888-989-7223, via online live chat, or via our email.