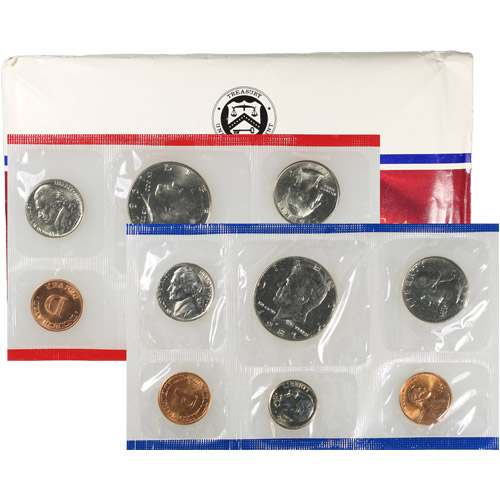 What do you do if you want to get an uncirculated example of each of the coins used in circulation for any specific year? Well, you purchase an official US Mint Set, of course! The coins in these Mint Sets are in brilliant uncirculated condition and come in their official government packaging. Their authenticity and quality are beyond reproach. Existing collectors, and those people wishing to begin their collections, find the Mint Sets to be more affordable than their Proof Set counterparts. The 1987 Mint Set contains 10 coins. Right now, Silver.com has these 1987 US Mint Sets available for purchase online.

Sales of Mint Sets in 1987 soared to 2,890,758 sets! This was quite a departure from the previous 3 years, where Mint Set sales had dropped consecutively each year. The 1987 sales were more than double the Mint Set sales of 1986. In fact, the 1987 sales exceeded the combined sales for 1985 and 1986. Why? These soaring sales are attributed to the 1987 Kennedy Half Dollar. These Half Dollars were not struck for circulation in 1987, thus making the only way to obtain one was by purchasing a Mint Set.

The Washington Quarter obverse features the left-facing profile of George Washington. In 1786, Jean-Antoine Houdon sculpted a bust of President Washington. This bust then became the inspiration for this design created by John Flanagan. Flanagan had the opportunity early in his career to work as an assistant to the legendary coin designer, Augustus Saint-Gaudens.

The Washington Quarter reverse features an eagle, perched atop a bundle of arrows with its wings outspread, framed beneath by two olive branches. This design was also the creation of John Flanagan.

Please contact the Silver.com Customer Service team if you have any questions – we will gladly assist you. We can be reached via phone at 888-989-7223, via online live chat, or via our email.