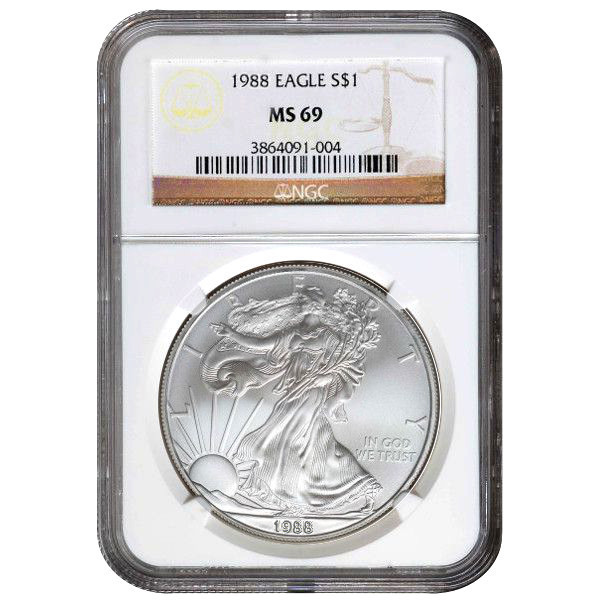 Lady Liberty and the bald eagle are the two images most commonly associated with the United States of America. The former was a gift to the American people from the people of France in the late-19th century. The latter was selected by the Founding Fathers as a national emblem. Both images appear on the Silver American Eagle coin. The Silver Eagle coin series is the official silver bullion coin of the United States government and these 1988 1 oz Silver American Eagles are certified MS69 by the Numismatic Guaranty Corporation. MS69-graded coins are known for sharp, attractive strikes on the mint and face value marks.

The Silver American Eagle was authorized by an act of Congress in 1985 to help raise funds for the federal government. The Liberty Coin Act was passed by US Congress using silver stores from the Defense National Stockpile, and designed to generate income for the government through the production and sale of a silver bullion coin. In 2002, Congress authorized the extension of the program through the purchase of silver on the open market. All Silver American Eagle coins are minted using silver mined in the US.

The 1988 1 oz Silver American Eagle coin features Adolph A. Weinman’s image of Walking Liberty on the obverse side. Lady Liberty can be seen walking toward the setting sun, with the engravings of “LIBERTY,” the year of minting, and the phrase “In God We Trust” surrounding her image.

On the reverse, the image of a bald eagle as created by the US Mint’s chief engraver, John Mercanti, is featured. A bald eagle is set behind a heraldic shield on the reverse side, clutching arrows in one talon and an olive branch in the other. Above its head are 13 stars representing the 13 original American colonies. The eagle is surrounded by engravings of “United States of America,” followed by the weight, metal content, and face value of the coin.

All orders placed with Silver.com are packaged safely and shipped in discreet packaging that does not give away its precious metal contents. If you come across any questions about the 1988 1 oz Silver American Eagles NGC MS69 before placing your order, simply call Silver.com at 1-888-989-7223. We can also be reached through online chat and email. 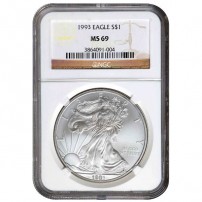 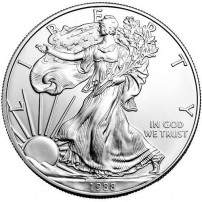